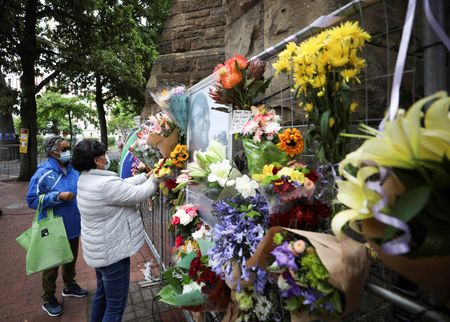 JOHANNESBURG (Reuters) – Mourners held a candlelight prayer ceremony outside the Soweto home of late Archbishop Desmond Tutu on Wednesday, weeping over the memory not only of a world-renowned lion of the anti-apartheid movement but of a kind and loyal neighbour.

Tutu, who died at 90 on Sunday, lived for a while on the same township street as his longtime friend Nelson Mandela, where residents take pride in being the only people in the world to grow up with two Nobel Peace Prize winners for neighbours.

“Come December time, Father Tutu and Mom Tutu used to bring groceries for all the grannies here. He used to look after the elders. So losing someone like him is painful. We’re filled with tears,” Nkele Tshakela told mourners standing alongside the street.

Usually abuzz with tourists drawn to its vibrant culture and history as a battleground during white minority rule, Vilakazi Street had a sombre mood as mourners laid flowers outside Tutu’s home and sang gospel hymns. Bishops and deans of the Anglican Church and Johannesburg Mayor Mpho Phalatse lit candles.

Tutu “lived a life of servanthood and did not seek personal gain,” Phalatse said. Bishop Steve Moreo of the Anglican Diocese of Johannesburg remembered his affectionate laugh and love.

Tutu’s funeral will be held on Saturday at Cape Town’s St George’s Cathedral, where he led marches and campaigns to end apartheid from the front steps.

Cape Town held an interfaith and musical tribute at its city hall on Wednesday evening, attended by members of Tutu’s family, as various quotes espousing Tutu’s life philosophy were digitally displayed against a backdrop to the podium.

“If we all live our lives just taking a small amount of the values that he lived with, can you imagine the different world, the different country … (and) the change that will be made?” Alan Winde, the Western Cape premier said in his tribute.

Tutu will be cremated after Saturday’s funeral service and his ashes interred beneath the floor of St George’s, the cathedral’s dean, Father Michael Weeder, told Reuters, pointing down at a slab of orange tiles aligned with the cross hung at the back of the cathedral.

Asked about his last memory of Tutu, a sobbing Weeder said: “The fact that the last meal that he had, his last supper was the Eucharist on Christmas day, and Archbishop Thabo (Makgoba) said on a few times he would say, ‘kealeboga, kealeboga’ (thank you) repeatedly.”

“So I think we will always say he died a happy death and I’m very pleased with that and grateful.”