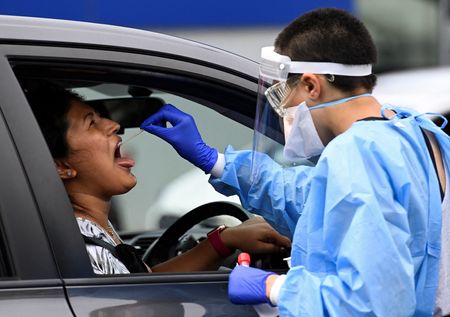 SYDNEY (Reuters) -Australia’s daily COVID-19 cases hit a record high for a third day on Wednesday, further straining hospital resources and testing facilities as public anger grew over the handling of the fast-moving outbreak of the Omicron variant of the coronavirus.

Many Australians, already unhappy about long queues at public testing centres and a shortage of at-home tests, were further incensed when news broke that tennis world number one Novak Djokovic had been given a medical exemption to enter the country.

Prime Minister Scott Morrison, under pressure at the start of an election year, announced a further relaxing of testing requirements to shorten long lines, and provided access to free rapid antigen tests for pensioners, the poor and veterans.

The rapid surge in cases in recent weeks has led to long lines at publicly-funded polymerase chain reaction (PCR) testing centres. That prompted authorities to ask people to only seek PCR tests if symptomatic, which in turn led to a shortage of rapid antigen tests, which can be used at home.

Morrison said supply would remain tight over the next few weeks, with 200 million in new supplies coming in over the next two months.

“There are no magic solutions, full stop. And so this virus will continue to challenge us, and it’s important that we all remain calm,” Morrison said after a National Cabinet meeting.

Officials reported a record 64,774 new cases, the majority in New South Wales (NSW) and Victoria, the country’s two most populous states. That exceeded the previous day’s tally of around 47,800.

Infections have surged from only around 1,200 a day since late November, when the first Omicron case was detected in the country.

Australia has recorded more than 612,000 cases and 2,290 deaths since the coronavirus pandemic began, with more than half of those infections reported over the past two weeks.

People admitted to hospitals in NSW and Victoria rose 10% over the previous day, and authorities warned those numbers would rise further over the next several weeks.

“We have got some challenging weeks ahead of us,” NSW Deputy Health Secretary Susan Pearce told reporters.

Under eased rules announced on Wednesday, incoming travelers will no longer need a second rapid antigen test if they test negative in a first test on arrival. The government also removed the requirement for a PCR test to confirm a positive rapid antigen test.

Authorities also fielded sharp criticism about the decision to grant Djokovic, who has declined to reveal his vaccination status but has previously stated his objection to mandatory vaccines, a medical exemption to play in the Australian Open tennis Grand Slam tournament.

The decision prompted an outcry on social media and criticism from other sports people, medical professionals and lawmakers.

Former Australian Rules player Kevin Bartlett tweeted that Australians “have been taken for fools,” while another former player Corey McKernan tweeted: “People with loved ones who are dying/some needing urgent treatment cannot get into their own states. You tell people they can’t go to Coles [supermarket] or a cafe without being vaxxed but if you’re world number one you get a pass?”

Many Australians, and particularly those in Melbourne which hosts the year’s first tennis major later this month, have been subjected to a series of lengthy lockdowns over the past two years.

Federal and state government heavily pushed the importance of vaccinations. As a result, 90% of people over 16 have been double dosed and a booster programme is rolling out.

Stephen Parnis, a former vice-president of the Australian Medical Association, said on Twitter that Djokovic’s approval “sends an appalling message to millions seeking to reduce” the risk of COVID-19. “#Vaccination shows respect, Novak.”

Tennis Australia and the Victorian state government said Djokovic did not receive any special treatment in a blind review process that involved a panel of health experts.

When asked his opinion, Morrison said Djokovic will have to provide acceptable proof that he cannot be vaccinated for medical reasons.

“My view is he should be treated no different to anyone else,” Morrison told reporters.

(Reporting by Renju Jose in Sydney and Sonali Paul in Melbourne with additional reporting by Byron Kaye; editing by Jane Wardell and Christian Schmollinger)