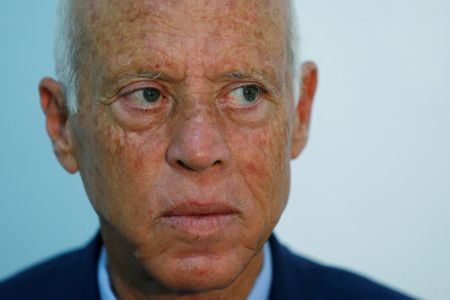 TUNIS (Reuters) -Tunisia’s powerful UGTT union criticized on Tuesday the president’s roadmap out of political crisis saying it does not break with individual rule and exclusion.

President Kais Saied said last month he would call a constitutional referendum in July, a year to the day after he seized broad powers in moves his opponents call a coup, and that parliamentary elections would follow at the end of 2022.

The referendum would take place on July 25, following an online public consultation that will start in January.

UGTT Union, the winner of Nobel Peace Prize in 2015 as part of the National Dialogue Quartet, represents one million workers and wields huge political clout.

“Setting a date for elections is an important step to end the exceptional situation, but it does not break with induvidual rule and exclusion”, the union said in statement, its first comment on the president’s plan.

It added that the online consultation suggested by Saied may lead to a monopoly of power and the abolition of the opposition.

Saied’s announcement of a road map out of the crisis last month has been awaited since he suspended parliament, dismissed the prime minister and assumed executive authority.

While those moves appeared popular after years of economic stagnation and political paralysis, opposition to his stance has sharpened, including from political parties and other major domestic players that were initially supportive.