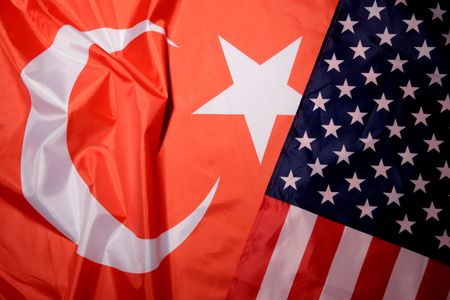 ANKARA (Reuters) – A meeting between U.S. President Joe Biden and Turkish President Tayyip Erdogan later this month is under discussion, a senior Turkish official said on Friday, with Turkey-Russia relations, U.S. weapons and conflicts in Ukraine and Syria on the agenda.

NATO-member Turkey has sought to strike a balance between Moscow and Kyiv by criticising Russia’s invasion and sending arms to Ukraine, while opposing the Western sanctions and continuing trade, tourism and investment with Russia.

Erdogan, who on Wednesday criticised what he called “provocative” Western energy policy towards Ukraine, is expected to visit Washington later in September, according to the official.

Biden and Erdogan last met in late June on the sidelines of a NATO summit in Madrid, where Turkey lifted its veto on Finland and Sweden joining the pact despite fierce opposition to their membership from Russia.

At the end of that summit Biden said the United States supported the sale of F-16 fighter jets to Turkey, and that he was confident the congressional approval needed for the sale can be obtained.

“After the last meeting with Biden, the U.S. administration took steps as we demanded on some important issues such as the F-16s. I think there will be similar things,” the senior Turkish official said.

Sentiment toward Turkey in the U.S. Congress has turned sour over the past few years after Ankara acquired Russian-made defence missile systems, triggering U.S. sanctions as well as Turkey’s removal from the F-35 fighter jet programme.

Discussions between the two leaders would include the war in Ukraine, relations between Turkey and Russia, and the Ukraine grain export deal, the Turkish official said.

The two countries are at odds over U.S. support for the Syrian Kurdish YPG – a U.S. ally in the fight against Islamic State in northeast Syria but deemed a terrorist group by Ankara.

“A new page can be opened in Syria now, and the United States needs to take steps in this context. Likewise, the YPG threat needs to be well evaluated. Some US officials are aware of this,” the official said.

Relations between Turkey and Greece, which have led to chronically strained relations in the eastern Mediterranean, are also likely to come up for discussion, the official said.