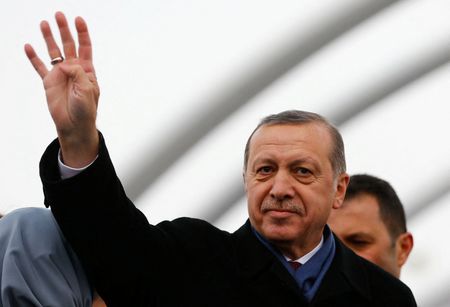 ANKARA (Reuters) -Turkish President Tayyip Erdogan said he was pleased with the lower volatility of the lira and that the government was working on steps to increase interest in the currency, state media reported on Tuesday.

“Slowly, in a gradual way and without haste, the lira will get firmer, interest rates will fall in the same way, and 2022 will be our brightest year,” the state-owned Anadolu news agency and other media reported him as telling reporters during his visit to Albania on Monday.

“We are quite pleased with the lessening volatility in the exchange rate,” he said. “Our additional work is continuing on maintaining stability in financial markets and boosting interest in the lira.”

“I take the view that interest rates are the cause and inflation the result. This result indeed is showing itself: inflation is on the verge of falling,” Erdogan said, repeating his unorthodox view on the link between rates and inflation.

However, annual inflation surged to 36.1% last month, its highest in the 19 years that Erdogan has been in power. Economists see inflation reaching 50% in the first half of the year.

The inflation surge has been fuelled by the lira’s slide. The currency weakness has in turn been driven by the central bank’s move to slash its policy rate by 500 basis points to 14% since September. It will hold its next policy meeting on Thursday and is expected to keep the rate steady.

After the lira slumped to a record low of 18.4 against the dollar on Dec. 20, Erdogan announced a scheme to support the currency by offering lira deposit accounts which would compensate savers for losses caused by further lira weakness.

(Reporting by Tuvan GumrukcuWriting by Daren ButlerEditing by Paul Simao)