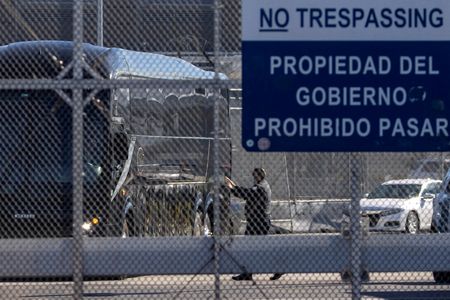 But after Texas and Missouri sued, a federal judge ruled it had to be reinstated. The Biden administration restarted https://www.reuters.com/world/us/us-restart-trump-era-border-program-forcing-asylum-seekers-wait-mexico-2021-12-02 the program in early December in El Paso, Texas. On Monday, 36 migrants were brought to the El Paso immigration court, the first to have their hearings under the reinstated program, the officials said.

The administration last week asked https://www.reuters.com/world/us/biden-asks-us-supreme-court-hear-remain-mexico-case-2021-12-29 the U.S. Supreme Court whether it needed to continue to implement the policy, officially called the Migrant Protection Protocols (MPP). Under the policy, put in place by former President Donald Trump, migrants arriving at the U.S.-Mexican border to seek asylum must wait in Mexico for their cases to be decided, instead of being allowed to await their hearings in the United States.

The U.N. refugee agency, UNHCR, has called for ending the program, saying it puts asylum seekers at risk and harms their due process rights.