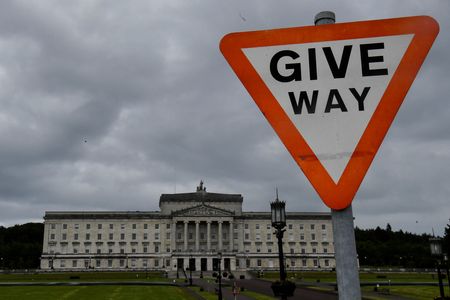 LONDON (Reuters) -Britain told the European Union on Tuesday there was no reason for it to take legal action over London’s plan to override some post-Brexit trade rules for Northern Ireland, which Brussels has said may breach international law.

Britain published legislation on Monday which would scrap checks and challenge the role played by the EU’s court in the region, saying the changes were needed to improve trade and reduce bureaucracy.

Tensions have simmered for months after Britain accused the bloc of taking a heavy-handed approach to the movement of goods between Britain and Northern Ireland – checks needed to keep an open border with EU-member Ireland.

European Commission Vice-President Maros Sefcovic warned that the EU would consider launching new infringement procedures against Britain. The EU is expected to set out its response on Wednesday, including details on possible legal action that could result in fines imposed on Britain.

Legal action could take a year.

Asked how nervous she was about moving towards a legal fight with the EU, British Foreign Secretary Liz Truss told LBC Radio: “There simply is no reason for the EU to take any action. This proposal, this legislation, doesn’t make them any worse off at all.”

Britain has long threatened to rip up the protocol, an agreement signed by Prime Minister Boris Johnson that kept the region under some EU rules and drew an effective customs border between Northern Ireland and the rest of the UK to prevent a back door for goods to enter the EU’s vast single market.

The legislation, like Brexit itself, has split legal and political opinion, with supporters of the UK’s divorce saying it does not go far enough and critics saying it undermines London’s standing in the world by challenging an international agreement.

In a leader column, The Times newspaper warned the government’s moves “risk damaging Britain’s reputation internationally while creating fresh uncertainty for businesses at a time of unprecedented economic challenges”.

“At best, the government’s actions set the stage for years of acrimonious legal disputes, at worst they risk a ruinous trade war.”

Irish Foreign Minister Simon Coveney said the British government’s strategy had made the chances of a compromise for Northern Ireland much more difficult.

“What the British government is saying, not only to Ireland, but also to the EU and to the wider world, is give us what we want, or we’re going to break international law to take it anyway,” he told BBC Radio.