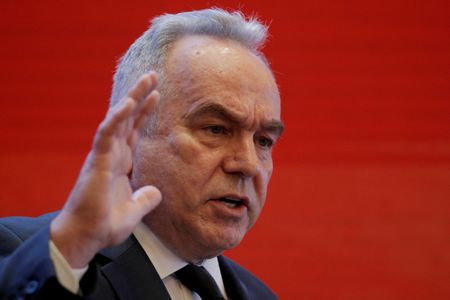 Campbell’s message, outlined in a U.S.-New Zealand business summit, comes amid rising concerns over the security implications of China’s expanding presence in the region, underlined by a pact Beijing signed with the Solomon Islands last month.

Speaking in a call from Washington DC, Campbell told attendees at the summit in Auckland that along with hosting island leaders, the United States intended to ramp up diplomatic ties with Pacific countries that had not seen ambassadors or engagement for decades.

He said the Biden administration would also work with U.S. AID and the new U.S. International Development Finance Corporation to fund projects in the region, as well as restore the Peace Corps. to much of the area.

The latter’s viability has been under threat in the past year as Micronesian countries initiated the process to quit following a disagreement over leadership. A final decision on whether they would leave has been delayed to later this year.

Campbell said the United States was more optimistic about the future of the forum and would put staff in place to support the forum going forward.

He added that along with more engagement with Pacific countries, the United States aimed to work more intensively on regional cooperation with New Zealand, Australia, Japan, Britain, France and others.

Campbell said New Zealand had in the past been more ambivalent occasionally in some areas of security, but that he didn’t believe that would be the case going forward.

“I think there is an understanding that the challenges that are presenting themselves on the global stage are not so distant – they’re closer and they have direct implications,” he said.

New Zealand Prime Minister Jacinda Ardern, who spoke earlier in the day at the conference, said the level of assertiveness and aggression in the region was growing, without citing the source of tensions.

“I don’t consider that we have an exposed flank when it comes to security arrangements for New Zealand,” she said. “We have strong partnerships and relationships and we’ve seen this growing engagement in our region.”