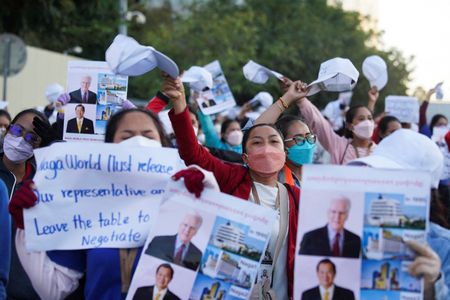 PHNOM PENH (Reuters) – The U.S. embassy in Cambodia said on Tuesday it was concerned by police action against workers protesting layoffs at a casino run by a Hong-Kong listed firm after a union leader was taken away in the latest series of detentions.

Thousands of workers have been on strike since last month in front of Nagacorp Ltd’s hotel and casino complex in Phnom Penh, demanding the reinstatement of 365 employees who were let go in April.

Chhim Sithar, president of Labor Rights Supported Union of Khmer Employees of NagaWorld (LRSU), was arrested as she stepped out of her car to join the strike, witnesses said.

On Monday, 15 workers were picked up in addition to nine detained on New Year’s Day who have been charged with endangering social security.

In a tweet on Tuesday, the U.S. Embassy in Phnom Penh said it was concerned by attempts to suppress the protests.

“We are following closely the troubling arrests of

@NagaWorld union members for their peaceful expression and urge authorities to hear citizens, not silence them. Freedoms of speech, assembly & association are guaranteed in the Cambodian constitution.”

Phnom Penh police have named Chhim Sithar as the ringleader of the strike and accused her of ties to foreign organisations trying to destabilise the casino operations, the biggest in the country.

Police have previously said the strike is illegal and urged the workers to end the agitation.

The company says that it was implementing a “mutual separation plan” for employees as part of efforts to improve cost efficiency because of disruptions caused by COVID-19.