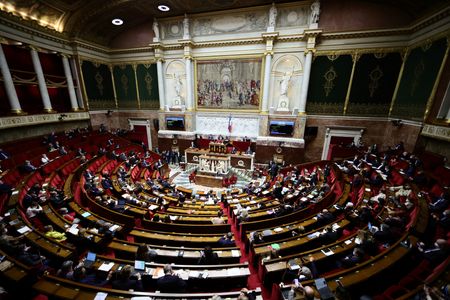 PARIS (Reuters) -Lawmakers from France’s ruling party said on Monday they would not be cowed by death threats that dozens of politicians have received over a bill that will require people to show proof of vaccination to go to a restaurant or cinema or take the train.

The new law, which would remove the option of showing a negative test result instead of having the jabs, has the backing of several parties and is almost certain to be passed by the lower house in a vote late on Monday or early Tuesday.

But a tense debate in parliament on Monday highlighted what the government and the opposition described as widespread fatigue with the pandemic and measures to tackle it.

The proposed tightening of the rules has angered anti-vaccination activists and some lawmakers say they have been subject to aggression including vandalism and violent threats.

“We will not yield,” Yael Braun-Pivet, of the ruling La Republique en Marche (LREM) party, told parliament, referring to death threats which she said politicians of all stripes had received. “It’s our democracy that is at stake.”

Lambasting what he called the “selfishness” of those who oppose immunisations, Health Minister Oliver Veran said: “The aim of this law is not to curb freedoms … it is to save lives.”

Last week, the garage of a ruling party lawmaker was set on fire https://www.reuters.com/world/europe/french-lawmakers-residence-attacked-suspected-anti-vaccination-protest-2021-12-30, with graffiti by suspected anti-vaccination protesters scrawled on an adjacent wall.

She said 52 lawmakers had received messages threatening to kill them for “attacking our freedom”, adding on Twitter: “Those death threats are unacceptable.”

France has traditionally had more vaccine sceptics than many of its neighbours, but has one of the EU’s highest COVID-19 vaccination rates, at nearly 90% of those aged 12 and over.

For months, people have had to show either proof of vaccination or a negative COVID-19 test at many public venues.

But as infections with the Delta and Omicron variants surge, the government has decided to drop the test option.

It aims for the vaccine pass to enter into force in mid-January following approval by both houses of parliament.

With Monday’s debate set to continue into the night, hard-left lawmaker Jean-Luc Melenchon said the proposed law, which would allow ID checks by others than the police, would set up a “totalitarian, authoritarian society”.

In tackling the pandemic, “you have been wrong on everything”, he told the government.

A protest was due to be held outside parliament at 5 p.m.

France saw large crowds rally against the health pass when it was introduced in the summer, but attendance at the weekend rallies dwindled as acceptance of the vaccine rose.