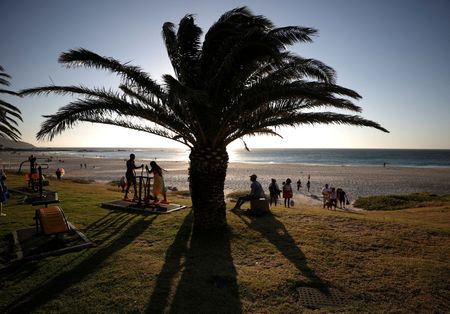 CAPE TOWN (Reuters) – South Africans cheered the government’s decision to lift its midnight curfew after nearly two years of COVID-19 restrictions, a relief for businesses and citizens just ahead of New Year celebrations.

“(The past two years) have been hard on us, if you look at our neighbours most guys have closed down, that’s how bad it was,” said 32 year-old Michael Mchende, a manager at Hard Rock Cafe in Cape Town.

“For this brand we are all about having a good time, so now that we have been allowed to actually have a good time, these doors are just going to be here for display. We are not going to shut down no more, we are all in.”

On Thursday South Africa became the first country to say it believed it had passed the peak of a wave of coronavirus infections caused by the highly contagious Omicron variant.

The government said it made the changes to lockdown restrictions based on the trajectory of the pandemic, levels of vaccination and available capacity in the health sector.

But the government said people should keep getting vaccinated and observing health protocols, including the mandatory wearing of masks in public places.

“We must ensure that our actions, our behaviour and our decisions over this festive season and beyond do not lead to more infections, more people ending up in hospitals and more deaths,” President Cyril Ramaphosa said in his New Year message to the nation on Friday.

“I’m happy and excited because the curfew has been lifted. But I’m also a little bit nervous because I hope that people won’t abuse that,” 41-year-old Gwendolyn Louw told Reuters.

“I am happy to see our freedom returning. Let’s hope it doesn’t come at a price.”

South Africans often flock to beaches to celebrate the New Year with family and friends.

“It just feels like a public holiday. There isn’t a vibe yet but maybe later,” said Onke Ngcuka, a multimedia artist who spoke from inside the Waiting Room club in popular Long Street.

“I think people are just maybe over it also, generally the festive season just didn’t have the normal December feel,” she said.

With close to 3.5 million infections and just over 91,000 deaths, South Africa has recorded the highest caseload and death toll in Africa during the pandemic. It recorded more than 20,000 infections a day during the fourth wave, which peaked in mid-December.

The country reported nearly 13,000 new cases on Thursday. Data showed a 29.7% decrease in the number of new cases detected in the week ending Dec. 25 compared to the previous week, the government said.