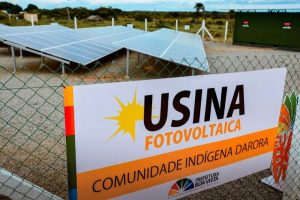 Solar panels with a capacity to generate 30 kilowatts no longer work in the Darora Community of the Macuxi people, an indigenous group from Roraima, a state in the far north of Brazil. The batteries only worked for a month before they were damaged because they could not withstand the charge. CREDIT: Boa Vista City Hall

“Our electric power is of bad quality, it ruins electrical appliances,” complained Jesus Mota, 63. “In other places it works well, not here. Just because we are indigenous,” protested his wife, Adélia Augusto da Silva, of the same age.

The Darora Community of the Macuxi indigenous people illustrates the struggle for electricity by towns and isolated villages in the Amazon rainforest. Most get it from generators that run on diesel, a fuel that is polluting and expensive since it is transported from far away, by boats that travel on rivers for days.

Located 88 kilometers from the city of Boa Vista, capital of the state of Roraima, in the far north of Brazil, Darora celebrated the inauguration of its solar power plant, installed by the municipal government, in March 2017. It represented modernity in the form of a clean, stable source of energy.

A 600-meter network of poles and cables made it possible to light up the “center” of the community and to distribute electricity to its 48 families.

But “it only lasted a month, the batteries broke down,” Tuxaua (chief) Lindomar da Silva Homero, 43, a school bus driver, told IPS during a visit to the community. The village had to go back to the noisy and unreliable diesel generator, which only supplies a few hours of electricity a day.“The solar panels were left here, useless. We want to reactivate them, it would be really good. We need more powerful batteries, like the ones they put in the bus terminal in Boa Vista.” — Lindomar da Silva Homero

Fortunately, about four months later, the Boa Vista electricity distribution company laid its cables to Darora, making it part of its grid.

“The solar panels were left here, useless. We want to reactivate them, it would be really good. We need more powerful batteries, like the ones they put in the bus terminal in Boa Vista,” said Homero, referring to one of the many solar plants that the city government installed in the capital.

Tuxaua (chief) Lindomar Homero of the Darora Community is calling for new adequate batteries to reactivate the solar power plant, because the electricity they receive from the national grid is too expensive for the local indigenous people. Behind him stands his predecessor, former tuxaua Jesus Mota. CREDIT: Mario Osava/IPS

But indigenous people can’t afford the electricity from the distributor Roraima Energía, he said. On average, each family pays between 100 and 150 reais (20 to 30 dollars) a month, he estimated.

Besides, there are unpleasant surprises. “My November bill climbed to 649 reais” (130 dollars), without any explanation,” Homero complained. The solar energy was free.

“If you don’t pay, they cut off your power,” said Mota, who was tuxaua from 1990 to 2020.”In addition, the electricity from the grid fails a lot,” which is why the equipment is damaged.

Apart from the unreliable supply and frequent blackouts, there is not enough energy for the irrigation of agriculture, the community’s main source of income. “We can do it with diesel pumps, but it’s expensive; selling watermelons at the current price does not cover the cost,” he said.

“In 2022, it rained a lot, but there are dry summers that require irrigation for our corn, bean, squash, potato, and cassava crops. The energy we receive is not enough to operate the pump,” said Mota.

A photo of the three water tanks in the village of Darora, one of which holds water that is made potable by chemical treatment. The largest and longest building is the secondary school that serves the Macuxi indigenous community that lives in Roraima, in northern Brazil. CREDIT: Mario Osava/IPS

Batteries still apparently limit the efficiency of solar energy in isolated or autonomous off-grid systems, with which the government and various private initiatives are attempting to make the supply of electricity universal and replace diesel generators.

Homero said that some of the Darora families who live outside the “center” of the village and have solar panels also had problems with the batteries.

Besides the 48 families in the village “center” there are 18 rural families, bringing the community’s total population to 265.

A solar plant was also installed in another community made up of 22 indigenous families of the Warao people, immigrants from Venezuela, called Warao a Janoko, 30 kilometers from Boa Vista.

But of the plant’s eight batteries, two have already stopped working after only a few months of use. And electricity is only guaranteed until 8:00 p.m.

“Batteries have gotten a lot better in the last decade, but they are still the weak link in solar power,” Aurelio Souza, a consultant who specializes in this question, told IPS from the city of São Paulo. “Poor sizing and the low quality of electronic charging control equipment aggravate this situation and reduce the useful life of the batteries.”

The low quality of the electricity supplied to Darora is due to the discrimination suffered by indigenous people, according to Adélia Augusto da Silva. The water they used to drink was also dirty and caused illnesses, especially in children, until the indigenous health service began to chemically treat their drinking water. CREDIT: Mario Osava/IPS

In Brazil’s Amazon jungle, close to a million people live without electricity, according to the Institute of Energy and the Environment, a non-governmental organization based in São Paulo. More precisely, its 2019 study identified 990,103 people in that situation.

Another three million inhabitants of the region, including the 650,000 people in Roraima, are outside the National Interconnected Electricity System. Their energy therefore depends mostly on diesel fuel transported from other regions, at a cost that affects all Brazilians.

The government decided to subsidize this fossil fuel so that the cost of electricity is not prohibitive in the Amazon region.

This subsidy is paid by other consumers, which contributes to making Brazilian electricity one of the most expensive in the world, despite the low cost of its main source, hydropower, which accounts for about 60 of the country’s electricity.

But in remote plants outside the reach of the grid, good batteries are needed to store energy for the nighttime hours.

Part of the so-called “downtown” in Darora, which has lamp posts, houses, a soccer field and a shed where the community meets. A larger community center is needed, says
the leader of the Macuxi village located near Boa Vista, the capital of the northern Brazilian state of Roraima. CREDIT: Mario Osava/IPS

Darora is not a typical case. It is part of the municipality of Boa Vista, which has a population of 437,000 inhabitants and good resources, it is close to a paved road and is within a savannah ecosystem called “lavrado”.

It is at the southern end of the São Marcos indigenous territory, where many Macuxi indigenous people live but fewer than in Raposa Serra do Sol, Roraima’s other large native reserve. According to the Special Secretariat for Indigenous Health (Sesai), there were 33,603 Macuxi Indians living in Roraima in 2014.

The Macuxi people also live in the neighboring country of Guyana, where there are a similar number to that of Roraima. Their language is part of the Karib family.

Although there are no large forests in the surrounding area, Darora takes its name from a tree, which offers “very resistant wood that is good for building houses,” Homero explained.

The community emerged in 1944, founded by a patriarch who lived to be 93 years old and attracted other Macuxi people to the area.

The progress they have made especially stands out in the secondary school in the village “center”, which currently has 89 students and 32 employees, “all from Darora, except for three teachers from outside,” Homero said proudly.

A new, larger elementary and middle school for students in the first to ninth grades was built a few years ago about 500 meters from the community.

“We dug three artesian wells, but the water was useless, it was salty. The solution was brought by a Sesai technician, who used a chemical substance to make the water from the lagoon drinkable,” Homero said.

The community has three elevated water tanks, two for water used for bathing and cleaning and one for drinking water. There are no more health problems caused by water, the tuxaua said.

His current concern is to find new sources of income for the community. Tourism is one alternative. “We have the Tacutu river beach 300 meters away, great fruit production, handicrafts and typical local gastronomy based on corn and cassava,” he said, listing attractions for visitors.