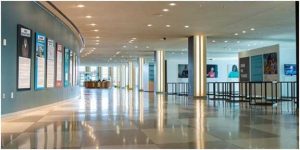 The UN’s empty corridors when the world body went into a lockdown mode because of the Covid-19 pandemic beginning March 2020. Credit: United Nations

At the United Nations, the lockdown has reduced the 39-storeyed Secretariat building to a veritable ghost town since most staffers continue to work from home— at least two or three days per week

The UN, which has office space, either on-rent or on long-term commercial leases outside the Secretariat, is looking for options to terminate some of these contracts– or have already done so.

When the issue of rented office space came up at a meeting of the UN’s Administrative and Budgetary Committee back in December 2015, it was revealed that over 5,300 staffers were in off-campus, leased-buildings at a cost of more than $56 million a year.

But since the pandemic shutdown, beginning March 2020, the UN has been downsizing its off-campus operations.

Asked for Secretary-General Antonio Guterres’ reaction to a “completely empty building at the moment”, his Spokesperson Stephane Dujarric told reporters: “We have experience with flexible working hours. I think it shows that it can be very productive in many cases. We continue to be also guided by recommendations from our health and safety experts.”

Asked about the rented properties for several UN departments and divisions, currently sporadically occupied, Dujarric said: “We’ve shrunk our footprint from rental properties that we have in Manhattan”.

This was in fact a trend before COVID with the “hot-desking” that has been put in place in many departments where people don’t have assigned spaces, but they will just take spaces as they come every day, given that– especially in a lot of departments — there is a lot of travel, Dujarric said.

“So, we’ve been able to shrink our real estate expenses,” he noted, while jokingly using a Hollywood metaphor: “Look Ma, I shrank the UN.”

Ian Richards, a development economist based in Geneva and a former President of the Coordinating Committee of International Staff Unions and Associations, told IPS through successive resolutions on what is called “flexible workplace strategies,” the General Assembly has been installing “hot-desking” at UN offices in New York, Geneva and elsewhere.

Hot-desking rules are premised on there being fewer desks than people (staff, consultants, interns) and therefore require staff to work part-time from home.

Further, and this is well documented in the scientific literature, hot-desking spaces do not allow staff to actually focus on their work, pushing more staff to work from home part of the week in order to be more productive, said Richards.

“Obviously, certain jobs lend themselves better to part-time telecommuting than others —and this is reflected in how the policy is implemented.”

However, he noted, the feedback from managers is that working from home part of the week improves productivity and motivation.
“It is also a non-negotiable requirement in the current job market if the UN wants to remain a competitive employer and keep attracting the cutting-edge skills it needs”.

Meanwhile, according to Cable News Network (CNN), virologists and epidemiologists say the new Omicron sub-lineage, the XBB 1.5, has features that give it the potential to drive a new surge of Covid-19 cases in the US, although it’s still unclear how large that wave will be and whether it could send many more people to the hospital.

Maria Van Kerkhove, technical lead on COVID-19 at the World Health Organization (WHO) is quoted as saying the XBB.1.5 is the “most transmissible subvariant detected yet”.

The issues surrounding working hours and conditions are “at the heart of most labour market reforms and evolutions taking place in the world today”, Branch Chief Philippe Marcadent said in a foreword to ILO’s Working Time and Work-Life Balance Around the World.

“The number of hours worked, the way in which they are organized, and the availability of rest periods can significantly affect not only the quality of work, but also life outside the workplace”.

The study, described as the first to focus on work-life balance, examines the affects that working hours and time schedules have on the performance of businesses and their employees.

Covering the periods before and during COVID-19, the report reveals that more than a third of all employees are regularly working more than 48 hours per week, while a fifth of the global workforce is labouring fewer than 35 hours per week, on a part-time basis.

The study analyses different work schedules and their effects on work-life balance, including shifts, arrangements for being on call, compressed hours, and hours-averaging schemes.

Innovative working-time arrangements, such as those introduced during the COVID-19 crisis, can bring great benefits, including greater productivity and improved work-life balance, said Messenger.

“This report shows that if we apply some of the lessons of the COVID-19 crisis and look very carefully at the way working hours are structured, as well as their overall length, we can create a win-win, improving both business performance and work-life balance”, he added.

However, the report cautioned that the benefits of some flexible arrangements, such as spending more time with the family, may also be accompanied by greater gender imbalances and health risks.