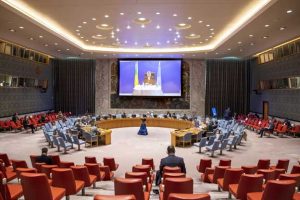 The United Nations Security Council (UNSC) is the principal organ within the United Nations System that is mandated under the tenets of the UN Charter for maintaining international peace and security. The focus here is to prevent and resolve international conflicts and disputes – i.e., using diplomatic means and leverage, as well as international treaties and laws that protect human rights and govern the rules of war.

In this regard, the Security Council helps maintain a balance of power between belligerents, working towards de-escalation of hostilities. Russia’s unlawful War of Aggression against the sovereign nation-state of Ukraine, shows in stark contrast of the limitations of the Security Council.

In other words, today, one of the five great powers that make up the Security Council’s P-5 permanent members is a principal belligerent – i.e., transgressing the laws of war, and committing crimes against humanity, war crimes and other gross violations of humanitarian law, bordering on genocide against peoples and their inalienable culture, not to mention freedom.

In more general terms, in the long decades since the end of World War Two, the Security Council has been able to deal more-or-less-successfully with threats to peace and security in many countries – i.e., despite the vagaries of the Cold War, proxy wars, civil wars, military coup d’état, ethnic conflicts, Islamist insurgencies, and terrorist attacks in the global north and global south alike – as well as global insecurity resulting from Weapons of Mass Destruction (WMD) and the specter of Nuclear War (Mutually Assured Destruction).

Among its arsenal, the Security Council has the mandate to impose draconian economic sanctions and authorize military intervention under Chapter 6 and Chapter 7 of the UN Charter. The veto power enjoyed by each of the five permanent Security Council members, negate such measures, as in the case of Russia today in Ukraine.

Regarding Human Security, the Security Council is mandated to promote international cooperation and respect for human rights, using all avenues available under international law – i.e., working in tandem with other international bodies, such as the International Criminal Court (ICC) in The Hague to ensure that perpetrators are held to account and prosecuted to the full extent of the law for crimes against humanity, atrocity crimes, war crimes, etc.

The Security Council also works with the UN Refugee Agency (UNHCR) and UN Migration (IOM) to provide humanitarian assistance, basic needs, and security to protect millions of vulnerable peoples (e.g., women, girls, boys, the elderly, disabled, and men), many who are legally identified as Refugees and Internally Displaced Persons (IDPs).

International Laws, however, are yet to be agreed upon to protect Climate Refugees, which is a pressing issue of great import.

The reason that Mr. Putin’s War of Aggression in Ukraine has caused such consternation within the UN Security Council is because it is such an essential cog in the international security system, and having it fail so spectacularly, does not bode well for Human Security. The Security Council is the only organ within the UN System with the mandate, authority, and frankly gravitas to take collective action to counter international security threats and maintain peace and security.

The Security Council’s inability to do so in Ukraine does not augur well and any further weakening of its mandate could indeed lead to a third World War with catastrophic consequences for humanity. The Security Council’s decisions or non-decisions have an enormous impact on Human Security, as it can and does shape the international security landscape.

Most importantly, it reinforces in a positive fashion, negation of the misconduct of rogue UN member states, authoritarian regimes, and non-state armed groups.

The United Nations Development Programme (UNDP) defines Human Security as “protecting the vital core of all human lives in ways that enhance human freedoms and human fulfillment”. It is a methodology to comprehend and act upon, international security-related vulnerabilities involving the safety of non-combatant communities and individuals, as opposed to the security of nation-states, and protecting state borders from invasion (as in the case of Ukraine today).

Human Security is a broad concept that takes into consideration economic, social, cultural conditions, and the environmental safety and well-being of peoples. It covers a wide gamut of security issues from physical, food, economic, health, environment, community, and individual protection, and to political freedom.

For the Security Council to be truly successful in implementing its mandate to maintain international peace and security, it must encounter and overcome the manifold vicissitudes and challenges threatening International Security and Human Security. Anything less would be to fall short of fulfilling its singularly unique mandate. How can we support the seminal work of the Security Council?

Faith-based Non-Governmental Organizations and Religious Orders have a unique mandate and responsibility to protect the faithful, and it has been argued forcefully by the Secretary-General of Religions for Peace, Professor Azza Karam, that multifaith action can literally move mountains.

And hence, the power of faith-based NGOs and religious orders must be gathered as a potent force to speak and act in one voice to support the Security Council in its quest to maintain global peace and security and protect Human Security.

What is the problem in this equation? Human beings are notoriously short-sighted, selfish, corrupt, and ego-centric, be they international civil servants, policy makers, or religious and faith leaders. The Security Council’s mostly secular bureaucrats appear to be more interested in working with countries with the greatest geostrategic influence and entities with the deepest pockets (such as those that attend the World Economic Forum in Davos), rather than with well-intentioned faith-based NGOs and religious orders.

On the flip side, leaders of faith-based NGOs and religious communities are more interested in doing their own thing (i.e., serving their own self-interests, communities, and organizations/institutions), as opposed to working together in unison to support the Security Council to maintain international peace and security and protect Human Security.

In fact, the Russian Orthodox Patriarch of Moscow Kirill is a staunch supporter of Mr. Putin’s illegal War of Aggression in Ukraine, which is an extreme case. ‘Just Wars’ supported by religious leaders simply beggars’ belief.

While the Security Council in its hubris and self-importance tends to discount the long-standing power of faith-based NGOs and religious orders, certain UN member states are paying serious attention and engaging them through national security bodies, ministries of the interior and officially mandated local faith-based entities – i.e., United Arab Emirates, Kingdom of Saudi Arabia, Bahrain, Qatar, Germany, UK, Italy, Finland, United States of America, India and most recently Israel, among others.

Millions of dollars are spent per annum to attract pliant faith-based NGO and religious leaders, have them feted and made to feel important. What is the quid pro quo? It is a grey area that needs much more scrutiny, regulation, and oversight.

Undoubtedly, the Security Council and progressive faith-based NGOs and religious orders must work together for international peace and security. Nevertheless, as the old proverb goes, “you can take a horse to water, but you cannot make it drink”.

For real change to happen trust and respect is a must, where the Security Council overcomes its prejudices, and draws on the collective power of diverse faith leaders who are genuinely committed with a track record to seeking to secure peaceful coexistence – in serious fashion – with all parties willing to listen to each other and work together for the greater common good.

Humanity is at a tipping point, especially in the context of Climate Change, which is exacerbated by large, medium, and small-scale wars and armed conflicts, and global public health crises (COVID-19). Investing in renewables, as opposed to polluting fossil fuels, and significantly changing how we, especially in the global north, maintain our economies, consumption patterns and livelihoods is the pragmatic choice.

We seem hell bent however on doing the exact opposite, while paying lip service and pretending that we are ‘doing good’. There are many examples, Germany, recently decided to demolish an abandoned village and restart coal mining, while at the same time arresting Greta Thunberg the young doyen of the environmental movement who was among many peaceful protesters.

In fact, Exxon’s scientists presented extremely accurate climate models internally that predicted Global Warming in the 1970s! When are we going to wake up and heed our collectively lived experiences and save humanity and the planet in the process.

Paper presented at the Ninth Annual Symposium on the Role of Religion and Faith Based Organizations in International Affairs – Theme: “Securing People’s Wellbeing and Planetary Sustainability” at the UN Church Center, 777 UN Plaza, New York on Tuesday, January 24, 2023.

Dr Purnaka L. (“PL”) de Silva is Faculty and University Adjunct Professor of the Year 2022 at the School of Diplomacy and International Relations at Seton Hall University, New Jersey.