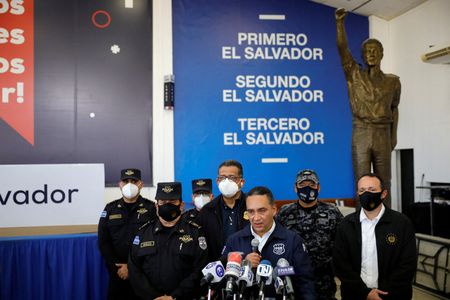 SAN SALVADOR (Reuters) – El Salvador’s Congress on Wednesday re-elected Rodolfo Delgado to serve for three more years as attorney general, despite U.S. concerns about his appointment and his decision to end a U.S.-backed anti-corruption accord.

In May, Delgado was appointed by lawmakers from President Nayib Bukele’s ruling party after Congress removed his predecessor for having supposed links to the right-wing opposition Nationalist Republican Alliance (ARENA).

Congress then also removed five judges on El Salvador’s supreme court, widely viewed as some of the few checks still remaining on Bukele’s power. That prompted U.S. Secretary of State Antony Blinken to express his concern at events.

Bukele quickly congratulated Delgado on his re-appointment after 66 of 84 lawmakers voted to keep him on three more years.

In June, Delgado said El Salvador was pulling out of an anti-corruption accord with the Organization of American States (OAS) in protest at an OAS decision to take on as an adviser a member of ARENA who has been under investigation.

Critics contend Delgado is reluctant to investigate possible cases of corruption under the Bukele administration and for showing a lack of independence. Delgado has swatted away the criticism, saying his office is going after corruption.