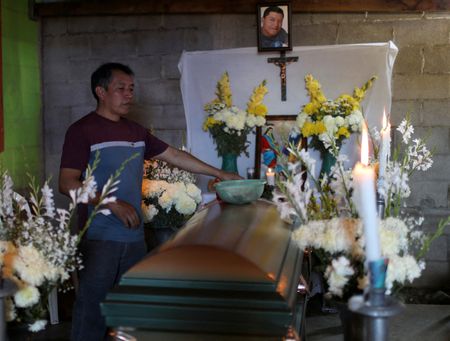 EL TEJAR, Guatemala (Reuters) – Guatemalan families began funeral rites on Sunday for the victims of a deadly Dec. 9 truck accident in southern Mexico that killed at least 50 migrants, most of them from the Central American country.

On Sunday afternoon, about 100 people gathered in the town of El Tejar, about 50 kilometres (31 miles) west of the capital, Guatemala City, to mourn the death of Daniel Perez, 41.

“I searched for him in five hospitals, and tragically I found him in the morgue,” said his wife, Mariela Olivares, 35, who traveled to Mexico after the crash to identify the father of three children who was trying to reach the United States after losing his job during the coronavirus pandemic.

It was his first attempt to migrate, Olivares said.

Feliza Uxlá, Perez’s mother, said that before he departed to the United States he told her that he was so worried about the family’s debt that he couldn’t sleep.

Perez was among more than 160 people riding in a truck trailer that overturned on a curve outside the city of Tuxtla Gutierrez in Mexico’s Chiapas state 10 days ago. At least 55 migrants were killed, one of the worst single-event death tolls for migrants in Mexico in the past decade.

The incident has put a spotlight on the dangers migrants face on their treks to the U.S. border, often at the hands of human-traffickers known as coyotes. Hundreds of migrants have died from violence or accidents in Mexico over the past decade.

Perez’s was one of the first four bodies to be repatriated. They arrived by plane in Guatemala City shortly before midnight local time on Saturday, according to authorities.

In Guatemala, many families are still trying to identify the victims of the Dec. 9 accident.

Raul Berrios, secretary general of Guatemala’s National Council of Migrants, said the government commission has received nearly 150 requests from families across the country seeking information about their loved ones, who migrated in the days before the disaster.