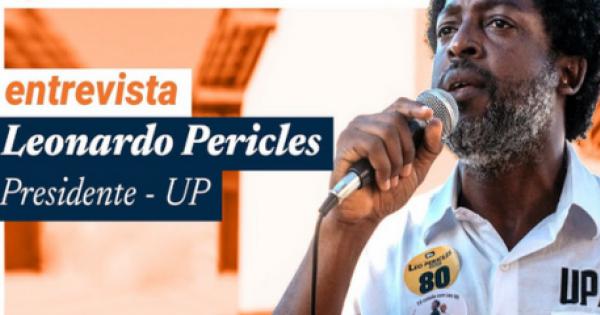 Photos: YouTube
The Supreme Electoral Court (TSE) registered 28,460 candidates, with 49.57% of the candidates being Black and only 48.86% white. There has never been a greater number of Black candidates than white candidates, although the Black community represents 56% of the Brazilian population. However, the only two Black candidates running for president, Leó Péricles (UP) and Vera Lúcia (PSTU), are excluded from the voting intentions.

Among thirty-two political parties, twenty-one present Black candidates and are on the left the strongest expression with 60.7% in the socialism and liberty party, 60% in the popular union and 58.7% in the communist party in Brazil. The Workers’ Party, the largest left party in Latin America, occupies the 20th place in the ranking for Black candidates.

“The symbolism of this achievement is gigantic. The first Brazilian constitution dates from 1824 and prohibited Blacks, indigenous peoples, the poor, and women from voting. This is the highest number of Black candidates in the history of the Democratic Rule of Law. Many advances in the electoral system were due to the strength of Black movements in the country and whites committed to this good fight,” said Paulo Paim, a Black senator.

In this sense, for the 2022 elections, the National Congress passed a law that provides that each vote for federal deputies, women, and Blacks be doubled when calculating the distribution of the electoral fund and party fund.

Finally, there is the possibility of representation with the face of Real Brazil, breaking with the conservative tradition of electing white men to power. However, how will Brazilian voters choose their candidates?

The political hierarchy is being disputed by two Black Republic candidates for president, twenty-two for the senate, twenty-six for state governors, eighty for district deputy, 1420 for federal deputies, and 2300 for state deputies. That’s a record numbers of Black candidates.

If this Black corporeality is elected, we could expect that de-colonial and anti-racist discourses will have an active voice within parliament. “We need to have the Black people represented in parliament in the most varied instances. It is fundamental for the elaboration and implementation of public policies for all. I cite as an example the more than sixteen racial projects approved in the Senate, of which I was the author, or rapporteur, between 2020 and 2022. Imagine if we had more Black parliamentarians in the Chamber and Senate. We would go much further. We will not go back. Let’s keep moving forward. Asé for our country,” Paulo Paim told Senate TV.

Senator Paulo Paim (Workers’ Party) represents the state of Rio Grande do Sul, a cold region historically populated by immigrants and European descendants. His narrative makes perfect sense because the Black community’s voice can’t be muffled in public opinion. From left to right, similarities converge mainly on the omission of Black genocide.

For example, in the first debate between candidates for the presidency of the Republic promoted by TV BAND, all were white and none of them spoke about this subject, even on the eve of the 29th anniversary of the Vigário Geral Massacre, a case that had repercussions worldwide, including on the NYT 21 Shot. Dead in Rio Slum; Policemen Are Suspected by James Brooke on August 31, 1993.

A friend asked if it was not a mistake made by the advisors. It’s just common sense due to the collective unconscious of the white supremacy.

Black lives don’t matter in Brazil. Nevertheless, with Black candidacies, we will be able to re-signify the history of a civilization destroyed by iron and fire because of the Eurocentric worldview and memory of the colonialism.