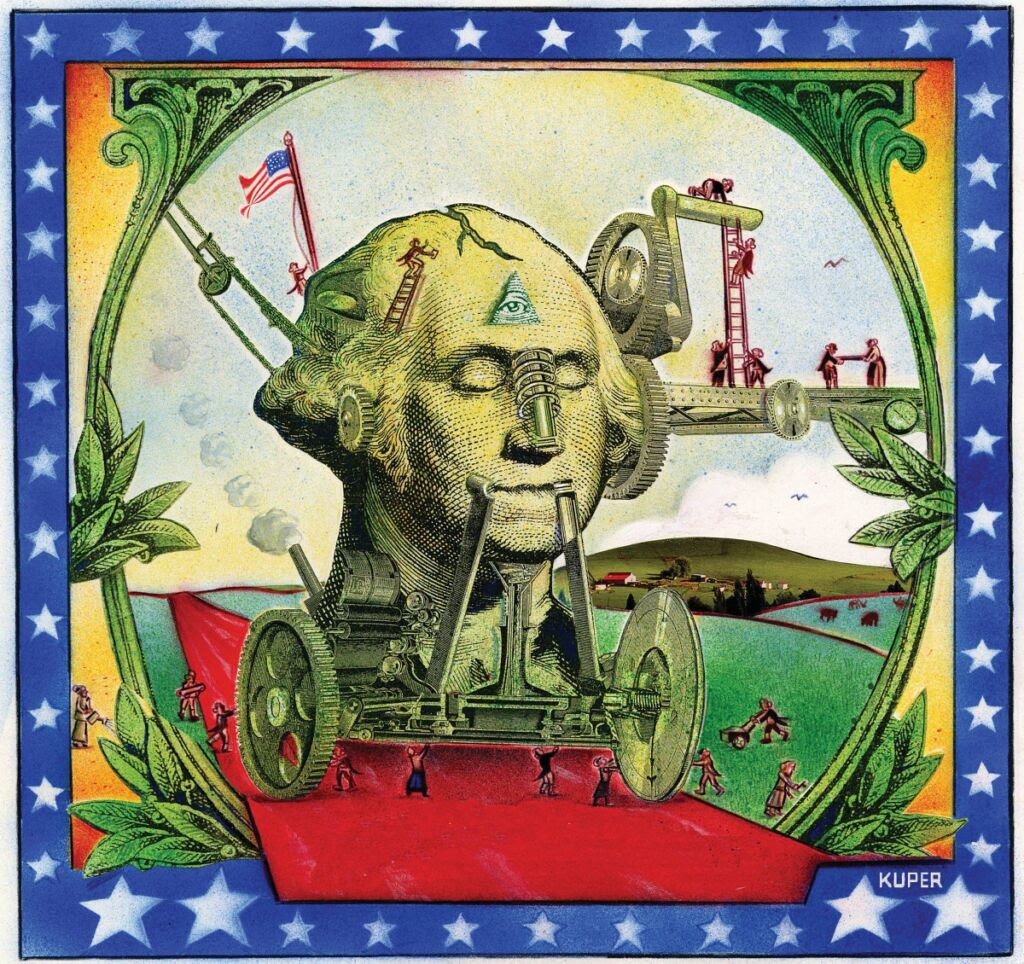 Often repeated because it has never been put better, close to 100 years ago, Louis Brandeis warned “We may have democracy, or we may have wealth concentrated in the hands of a few, but we can’t have both.” Every year newspaper headlines decry how fewer and fewer people own more and more of America’s wealth— resulting in increasingly less and less democracy.

This concentration of great wealth gives the super rich their super political power.

The ability of this group to influence elections by unlimited contributions to Super PACs and dark political donations has been well documented. But the Supreme Court ruling that gives the wealth class the ability to do this, Citizens United, cannot be reversed until the Democrats have the presidency and sufficient majority in both houses of Congress to appoint new Supreme Court Justices.  In order for the necessary number of new Justices to be appointed, two of the current judges must either resign or die while the Democrats have control.

Perhaps the issue of executive pay is the best example of the ultra-wealthy’s ability to influence the crafting of legislation.

But there are other ways by which the wealthy accumulate their riches that are quite open to attack.  They remain invincible merely because the responsible voting public does not understand how these ways are being protected; and more accurately, how all attempts to reduce these methods of wealth accumulation  are defeated by the public’s lack of knowledge of the corporate-banking system and the relevant laws.

Perhaps the issue of executive pay is the best example of the ultra-wealthy’s ability to influence the crafting of legislation.  Piece after piece of legislation has been written which appears to remedy this great cause of economic inequality, but in the end, only serves to preserve it.

Economist Thomas Piketty stunned the readership world with a bestseller on the dull science, economics, with his Capitalism In The 21st Century. He identified that outrageous executive pay, especially in the financial sector, is a prime cause of the increasing wealth gap.

At present CEO pay trends upward of 300 times median worker pay. It wasn’t always this way. From J.P. Morgan’s era at the beginning of the 20th century to the 1970s, the ratio of CEO pay to median worker pay was 20:1. The cunning robber baron observed that he would not invest in a company in which the ratio was greater because then the CEO would put his own financial interests above that of the corporation.

But then in the late 1970s that ratio started to creep up.

By 1992, as part of his Putting People First campaign and in the face of public outrage at this outrageous pay gap, Clinton promised to end it by putting a cap on executive pay. But it wasn’t going to be by a maximum pay, it was by use of a tax disincentive.

Corporations could only deduct $1 million of executive pay from their income tax. Everything over that was not deductible. And perhaps it may have had some effect.

But, here is the promised example of how the corporate-banker lobby has defeated every attempt to lessen the swift upward transfer of wealth.

The Treasury Secretary, Robert Rubin, an ex-CEO of Goldman Sachs, recommended a loophole. Executive pay could be deducted over that one million-dollar Issue if it was related to performance, which meant payment in stock or stock options.  Labor Secretary Robert Reich objected, but Clinton chose to follow the man from Wall Street.

You can see the results of the Rubin loophole in the graph below. CEO compensation skyrocketed.  You might be willing to give Clinton the benefit of the doubt that this was an unintended consequence –  and from his perspective it may have been. Politicians often have no more understanding of an issue than the average voter. They depend on their advisors. But there’s little doubt that an experienced banker understood this perverse incentive.

The graph below by the Economic Policy Institute answers the question as to what happens when Democrats are in power regarding economic inequality policies.  Not only did they leave this failed remedy in place, as explained later below, they applied this proven unsuccessful solution again.

Early in his days in office, Obama vowed to take “the air out of golden parachutes.”  He added, “For top executives to award themselves these kinds of compensation packages in the midst of this economic crisis isn’t just bad taste — it’s a bad strategy — and I will not tolerate it.”

How was he going to put on this restraint? Exactly the same way Clinton had done it. Corporations could only pay cash of $500,000; anything over that had to be in stock that could not be sold until the bailout funds were paid back – which took about a year.

The Myth of Shareholder Control

The framers of Dodd Frank claimed they had the solution to this unacceptable pay gap. They would force corporations to put executive pay on the agenda of the annual general meeting (AGM) for a shareholder vote. Looks good, but only if you don’t understand how corporations are governed in practice— quite different from what you were likely taught in the classroom. In theory they are modeled on a democracy, but in practice they are a monarchy ruled by the CEO with more authority than a medieval king.

If shareholders actually control the corporation, as many believe, why didn’t they put a cap on CEO pay decades ago?

The answer requires some understanding of one feature of corporate governance called the proxy. A proxy allows someone to vote another person’s shares.

Some months before the AGM, management sends out relevant documents including a proxy circular saying that if the shareholder can’t attend the AGM, would they please sign the proxy form so there would be sufficient votes for a quorum to pass resolutions. If the image of a spider handing a proxy form to a fly arises in your mind, you’ve correctly sensed what’s happening.

Many of the shareholders are mom-and-pop investors who hold shares in the company because their financial advisor told them to buy. They only care about getting dividends or capital gains. They have no knowledge of the industry and none of the names mean anything to them. They want to be good corporate citizens so they happily sign the proxy form and send it in.

The person who now has their vote by proxy is an employee of the corporation who the CEO can fire. So guess how they vote with all of these voting rights?

The CEO now controls the election of the Board of Directors. They then usually elect CEOs of other corporations who have a vested interest in keeping CEO benchmark pay high.

Now consider the motivation of money managers for institutional investors like the enormous pension funds that control huge blocks of shares. These managers want the largest dividends for their own commission. They don’t care about the long-term health of the corporation. Similarly, the equity/hedge fund managers want the greatest dividends for their commissions— and to hell with the long-term health of the company. It’s the I’ll-be-gone, you’ll-be-gone mentality – or short-termism as business professors call it.

These groups will vote for any CEO who will strip the earnings of the corporation by large dividends and don’t care how much the CEOs take for themselves.

Can there be any doubt that when the CEO’s employee votes the proxy shares and when the money managers at the pension and equity/hedge funds vote their shares, the continuing sky high executive pay will be approved?  Then the corporate lobby group will tout these approvals to make voters feel they can’t do anything about this  preposterous pay issue.

Studies confirm that this Rubin “performance pay” loophole, supposedly to reward positive results, does the opposite. Claire Zillman writing in Forbes reported on one such study in 2016 with a headline that says it all, Highest-Paid CEOs Actually Run Some of the Worst-Performing Companies

Executives have mountainous piles of stock to sell. They don’t have to sell it on the open market. They can have their corporations buy it back secretly and at a time during which they can manipulate the stock price for a temporary high. For example, they can defer expenses for one quarter making that time appear more profitable.

This is ultimate insider trading you’re probably thinking. Isn’t it prohibited? Yes it is, but Reagan introduced a loophole that allows executives to have their own corporations buy back their shares provided the transaction conforms to certain, very complicated criteria (Securities and Exchange Commission rule 10b-18).

It’s a safe haven loophole so complicated that a prior head of the Securities and Exchange Commission,  Mary Jo White, admitted that the SEC could not supervise these purchases. So it has been open season for the executives to wildly insider trade for 40 some years and no party in power has closed this dodge by eliminating 10b-18!

When he was an SEC Commissioner, Robert Jackson, Jr., a long time Republican and Trump appointee, warned of the abuse of the executive share buyback. His inquiry revealed a bump in the stock price at the time of the executive buyback, every time.

It’s not that buybacks are necessarily evil. Only the safe haven that permits corporate buyback of executive shares, rule 10b-18, needs to be eliminated. Then the executives could sell their shares on the open market like anyone else.

What Can Be Done?

There is certainly enough will among the people to limit executive pay, but not enough knowledge of how the politicians will fight a rearguard action for their wealthy campaign donors and future book deals, speaking tours and positions as lobbyists. The public needs more awareness of these past techniques in order to end this manipulation. For, as knowledge is power, the uberrich have it regarding the methods of these upward transfers of wealth and the voting public does not.Download

San Francisco voted for proposition L, which contained a tax on corporations at which the pay ratio was greater than 100:1.  While this solution is worth watching, Quartz magazine detailed a number of possible reasons why it will be ineffective, especially due to the complex way both the ratio and the CEO pay can be calculated due to the  corporate structure and fluctuations in the value of stocks.

These various methods aimed directly at trying to squelch, or tax, executive pay will likely not be effective. Economist Gabriel Zucman, of the University of California Berkeley, one of the world’s leading authorities on global inequality, says the most effective way to regulate top-end inequality, including executive pay, is: sky-high top marginal income tax rates to match sky-high income.