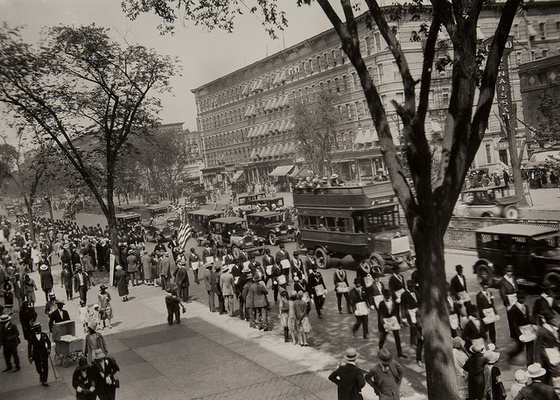 In the latest installment of our partnership with the Center for Advanced Study in the Behavioral Sciences, Shane Graham reflects on David Levering Lewis’s magisterial “When Harlem Was in Vogue” on its fortieth anniversary.12.10.2021

In the early 20th century, sociologist Charles S. Johnson reasoned that only one area of American life had not been proscribed for Black people. Historian David Levering Lewis explains Johnson’s thinking: “No exclusionary rules had been laid down regarding a place in the arts. Here was a small crack in the wall of racism, a fissure that was worth trying to widen.” At the height of the Harlem Renaissance, James Weldon Johnson similarly enthused that after trying “religion, education, politics, industrial, ethical, economic, sociological” approaches, it was through the arts that the African American was breaking through racial barriers “faster than he has ever done through any other method.” But the quixotic tragedy of the era, according to Lewis, is that, by the time the Renaissance fizzled out in the Great Depression, believing “that favorable reviews in The New York Times were a blow against the abuses of sharecropping” had begun to feel naïve.

Even so, Lewis’s magisterial history, When Harlem Was in Vogue, was published some 60 years after the Harlem Renaissance began. It has now been in print continuously for 40 years. Surely, a century of enduring public interest is evidence that the efforts of the artists and their facilitators made a lasting impact on American and world arts—a legacy of Black accomplishment that continues to serve as a source of pride and dignity, as well as ammunition in the ongoing struggle for civil rights. No one has told the story of that legacy better than Lewis.

When Harlem Was in Vogue was not the first treatise on the “New Negro” movement of the 1920s and early 1930s. Most significantly, Nathan Irvin Huggins’s Harlem Renaissance (also celebrating a milestone anniversary, 50 years, in 2021) preceded Lewis’s book by a decade and remains widely respected. Indeed, Huggins might be stronger than Lewis when it comes to accounting for what was important in African American painting, sculpture, and other nonliterary arts of the era.

Far from being redundant, however, When Harlem Was in Vogue was groundbreaking. Because the book is, at its core, an institutional history, it probes deep behind the scenes of the Renaissance. Lewis focuses not just on the artists, but on the tireless efforts of a small group of people to promote and support those artists, and on the organizations and publications that made the whole movement possible.

Consider, for example, the very different treatment two important figures receive in the two books: Huggins’s book includes one mention each of Charles S. Johnson, sociologist at the Urban League, and Walter White, civil rights activist at the NAACP. By contrast, Lewis devotes many pages to each figure, despite the fact that Johnson was not an artist and White was a novelist of only modest distinction.

Lewis highlights these nonartists in his history of an art movement for good reason. Johnson and White were two of “the Six,” alongside Jessie Fauset at The Crisis, Alain Locke at Howard University, the writer and NAACP executive James Weldon Johnson, and the gambling racketeer Casper Holstein (the last not even mentioned in Huggins’s book). Without these half dozen people, Lewis explains, “the Harlem roster of twenty-six novels, ten volumes of poetry, five Broadway plays, innumerable essays and short stories, two or three performed ballets and concerti, and the large output of canvas and sculpture would have been a great deal shorter.”

When I first began to seriously study Langston Hughes and Claude McKay, Lewis’s book (in its updated edition from 1997) was one of the first texts I read. Forty years after its first publication in 1981, When Harlem Was in Vogue shows its age and suffers from blind spots, but it remains the essential text on one of America’s most important artistic movements, as tightly narrated and readable as it is comprehensively researched.

David Levering Lewis is best known as a biographer: his first book was a biography of Martin Luther King, Jr. (1970), and his magnum opus is his two-part biography of W. E. B. Du Bois, both volumes of which won the Pulitzer Prize for Biography (in 1994 and 2001, respectively). Writing When Harlem Was in Vogue called on a similar skill set and synthesis of published works, archival collections, and oral history. But because it is the biography of an entire movement, the scope of its research is larger than that typically required to tell the story of any one person’s life. If the taut, 307-page narrative belies the extent of the author’s research, the additional 54 pages of notes lay it bare. Lewis visited nearly a score of special collections libraries and archives and conducted almost 50 interviews between 1974 and 1978.

Lewis’s narrative is remarkable, moreover, for the richness of its sociohistorical analysis. Before we meet any of the writers and artists most famously associated with the Renaissance, the author gives us a detailed account of debates over African American participation in World War I. This is followed by a cogent narrating of the Red Scare of 1919, race riots and lynching, the rise of Garveyism, and the Great Migration of Blacks from the South to northern cities. Lewis thereby sketches a complex background, demonstrating why conditions were optimal for something like the New Negro movement to take off. This context also helps us understand why the early poetry and fiction of Claude McKay, Langston Hughes, Countee Cullen, and Jean Toomer were so revolutionary and important.

Lewis’s research was so thorough and his narrative so compelling that, to my knowledge, no one in the 40 subsequent years has even attempted another comprehensive account of the Harlem Renaissance as a whole. Instead, academic monographs that study the movement have filled in gaps and blind spots in Lewis’s account or have stretched our understanding of the movement in new directions.

LEWIS’S BOOK IS, AT ITS CORE, AN INSTITUTIONAL HISTORY THAT PROBES DEEP BEHIND THE SCENES OF THE HARLEM RENAISSANCE.

The most obvious blind spot? Lewis tends to discount the contributions of women writers and artists to the cultural work of the Harlem Renaissance.

Of the women he discusses, Jessie Fauset gets the most attention. But this is primarily for her efforts as publisher and facilitator of other people’s art. With periphrasis and tepid praise, Lewis dismisses Fauset’s own fictional output: “Had she been younger when she moved to New York, Jessie Fauset’s own capacity for reaching out to new ideas and new forms might have been far greater,” he explains. Her novels, he says, are part of “the Jane Austen phase of Renaissance literature.” Lewis treats Nella Larsen, Fauset’s fellow writer in the “genteel tradition,” more favorably, calling Quicksand (1928) “one of the three best novels of the Renaissance,” but nevertheless pays her far less attention than he does Cullen, Hughes, McKay, or Toomer.

Most frustratingly, in 1981, scholars of African American literature still paid little attention to the work of Zora Neale Hurston, and Lewis’s book is no exception. He might have justified her minor role in his narrative by noting that her most important works were not published until the mid-1930s, after the period parameters he used to define his book’s scope. But Hurston was one of the most colorful characters of the era, and the eclipsing of her role in the story disappoints.

Over a decade later, it would fall to Cheryl Wall to take seriously the contributions of Fauset, Larsen, and Hurston, by devoting a full chapter to each of them in Women of the Harlem Renaissance (1995) and insisting that the “Harlem Renaissance was not a male phenomenon.”1 Gloria Hull would do the same for the women poets of the 1920s.2

A 21st-century reader might also wish When Harlem Was in Vogue had considered more thoughtfully the role of LGBTQ actors in giving the Harlem Renaissance its energy and character. Closeted or in the open, a striking number of the movement’s key figures were gay. Lewis neither denies nor hides this fact about them. Yet he brings up this facet of their identity almost always in relation to their professional or personal failures and shortcomings. For Countee Cullen, for example, his “homosexuality was to be a source of shame he never fully succeeded in turning into a creative strength,” and in his marriage to Yolande Du Bois, Cullen was “ill-suited to the demands of matrimony.”

The defiantly and openly gay lifestyle of other Black writers, musicians, and artists of the period goes unmentioned. Lewis also neglects any discussion of how these artists might have encoded gay culture into their art and literature. The 21st century has given us a torrent of scholarship correcting this blind spot in the dominant narrative of the Renaissance.3BROWSE

Another myopic tendency in Lewis’s narrative can be glimpsed in his declaration that “Harlem was Afro-America’s Paris,” which ignores the fact that Paris was many African American intellectuals’ Paris. Indeed, one of the most dramatic developments in Harlem Renaissance studies since the original publication of When Harlem Was in Vogue is the turn toward transnational approaches to culture.

The New Negro movement that is closely associated with Harlem, for example, had a second node in Paris: specifically, in the Nardal sisters’ salon and the jazz clubs of Montmartre. Paris, like Harlem, became “a special space for black transnational interaction, exchange, and dialogue.”4

Likewise, Lewis dismisses McKay’s second novel, Banjo (1929), as “fairly bad.” He neglects to mention its enormous influence through translation on a whole generation of Black writers in France, including the Negritude poets. Lilyan Kesteloot had made a convincing case for this and other connections in Black Writers in French (1963).5).] In subsequent decades, James de Jongh, Michel Fabre, Brent Hayes Edwards, Anita Patterson, and many others have further documented and interrogated the ties between Black America and the Black francophone world.6

Also little remarked in Lewis’s narrative is the large number of Caribbean migrants who figured importantly in fomenting a Harlem culture in the 1910s and 1920s. The Jamaican Marcus Garvey helped cultivate an ethos of Black pride in the 1910s; the Virgin Islands–born mobster Casper Holstein funded many crucial institutions of the 1920s; and Claude McKay pioneered a poetry of defiant Black self-assertion before and after he left Jamaica in 1912. Other important figures with Caribbean upbringings or parentage include Eric Walrond, Nella Larsen, Harold Jackman, and Richard B. Moore.

Lewis mentions this fact of their biographies. But he does so without offering a holistic account of how the writers’ Caribbean upbringings shaped their writings and that of American colleagues like Langston Hughes and Zora Hurston. And he does not consider what it means that these writers’ works were part of the Harlem Renaissance, but also “part of a postcolonial Caribbean tradition.”7

Read in this light, When Harlem Was in Vogue seems caught in a provincialism that is perhaps intrinsic to the label “Harlem Renaissance.” The movement looks different when Harlem is seen not as the singular center of the Black world, but as one hub among several, in a larger network of diasporic Black cultural formation and exchange. Add to this the heteronormativity, as well as the premium placed on male figures that characterized most historiography in 1981, and we must acknowledge that the book shows its age.

Perhaps it is time, then, for someone to undertake a revised and more inclusive history of the flowering of Black art in the 1920s and 1930s. Still, that person will have their work cut out for them in trying to surpass David Levering Lewis, whose book remains a model of how to balance scholarly rigor with engaging storytelling.