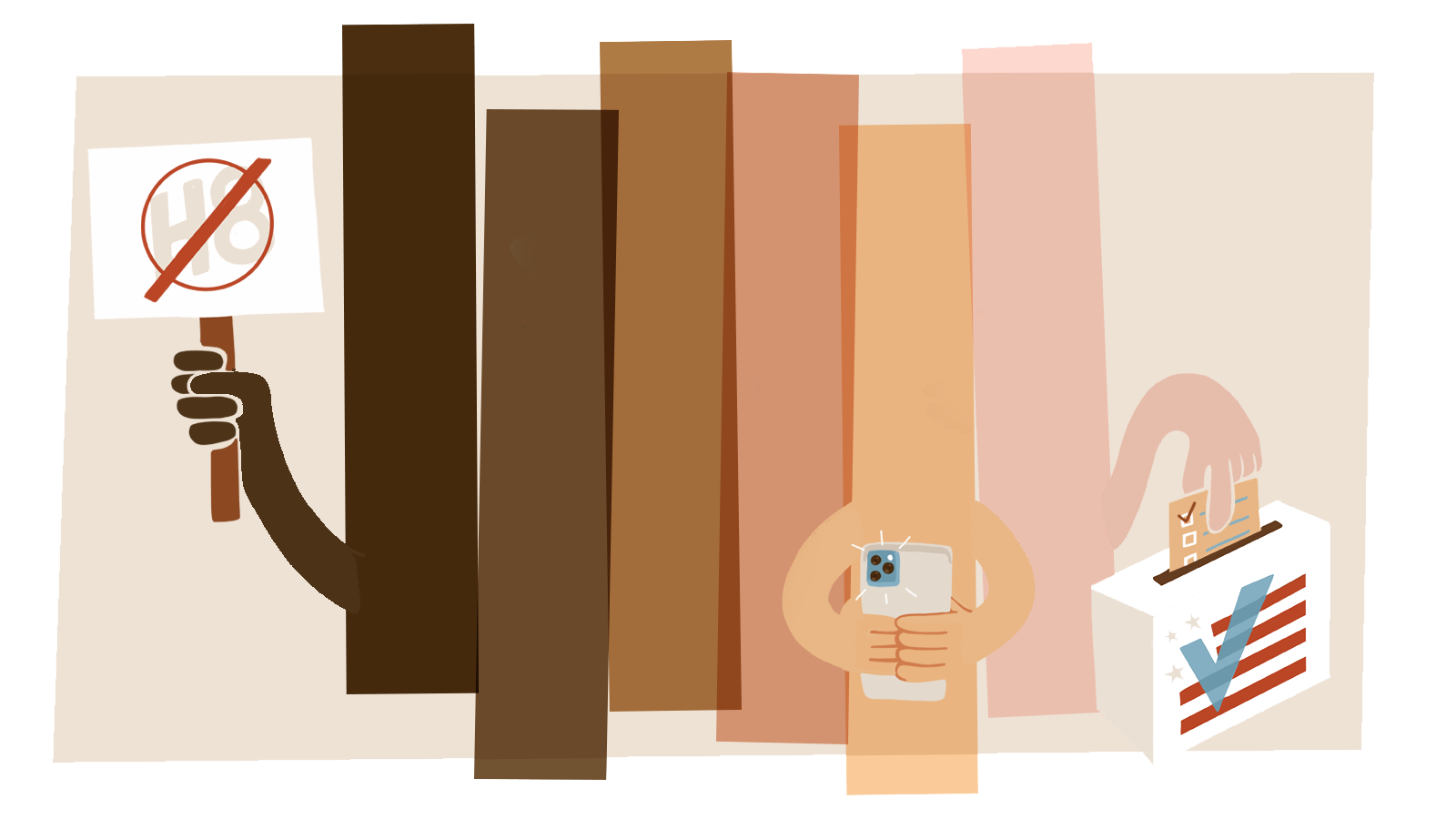 We witnessed the destructive power of anger and resentment this year.

Brandishing Confederate iconography, insurrectionists laid siege to the US Capitol, in what amounted to an assault on multiracial democracy. Republican-led state legislatures enacted laws making it more difficult for people of color to vote, and also waged war on transgender kids. Within the GOP, Islamophobia proved to be as potent as ever.

Cruelty didn’t go unchallenged, of course. For instance, in the aftermath of the massacre in Atlanta that left eight people—including six women of Asian descent—dead, people across the country poured into the streets to demand change and combat hate. Still, 2021 was marked by a number of prominent issues, particularly on the race and equality front.

To explore some of these issues, I reached out to experts. They broke down some of the most important 2021 moments and trends—and reflected on how they might inform race and equality conversations as we trudge into the year ahead.

The power of eye-opening images

In 2021, I was struck—again—by the role of images in advancing justice. Among the most potent examples were the videos of the murders of George Floyd and Ahmaud Arbery.

Images have long been catalysts of change in the struggle for equal justice under law and civil rights in the US, a focus of my scholarship. Photographs of police violence against peaceful demonstrators in Birmingham “sickened” President John F. Kennedy and pricked the conscience of Whites who had ignored the horror of segregation, leading to the Civil Rights Act of 1964. When protesters marched across the Edmund Pettus Bridge in Selma and were attacked by law enforcement officers, footage of what came to be known as “Bloody Sunday” helped turn the tide in the struggle to pass the Voting Rights Act of 1965.

In recent years, ordinary people with cell phones have borne witness to racial violence and shared their footage on social media, making injustice more visible. Photos and videos have fostered empathy and proved powerful tools for holding perpetrators of violence to account. Footage of Floyd’s murder was shown to the world—and to the jury that convicted Derek Chauvin. Video of Arbery’s killing appears to have been instrumental in Cobb County’s senior assistant district attorney’s successful prosecution of his killers.

Yet images of Black suffering can also normalize it, further devaluing Black lives. Still, the democratization of the means to capture and disseminate images has helped ensure that racial violence cannot flourish in secrecy.

Eye-opening images can sometimes help right wrongs, renewing faith that “these days of challenge” can help “make America what it ought to be”—the hope that Dr. Martin Luther King, Jr. expressed in 1968, on the eve of his assassination in Memphis.

Tomiko Brown-Nagin is the dean of the Radcliffe Institute for Advanced Study at Harvard University and the Daniel P.S. Paul Professor of Constitutional Law at Harvard Law School.

Racial resentment in a new guise

A disturbingly memorable moment for me in 2021 was watching the parents of elementary school children take their turns berating my family’s local school board members about so-called “Critical Race Theory,” and hearing their supporters cheer and applaud from the lobby hallway to which they had been relegated for refusing to wear masks.

Their comments ranged from generic talking points that I recognized as having come from the national conservative organizations manufacturing the anti-CRT outrage to disjointed diatribes against masks, vaccines, globalism and government “co-parenting.” The information deluging these folks may have been fake, but I could see clearly that their emotional reactions to it—mostly rage—were very, very real.

Racial resentment is a hell of a drug. Add to it a general sense of (faux) entitlement, the hatred that results from decades of “us vs. them” polarization (including the working mom/stay-at-home mom wars) and a shot of Christian nationalism, and the resulting cocktail is so potent that it renders wild conspiracy theories credible, lost causes winnable and democracies vulnerable.

Maybe most disturbing is that this intoxicating recipe for racial resentment isn’t new. It’s just got a fancy new acronym for its name on the menu, and too many Republican leaders will only continue to serve it to their base in the year ahead.

Angie Maxwell is an associate professor of political science at the University of Arkansas.

The never-ending desire to suppress some Americans’ votes

This year alone, 19 states passed laws making it harder to vote, according to the Brennan Center for Justice. Not only were there changes to mail-in balloting, stricter voter identification requirements and voter purges, but some states began criminalizing certain actions that facilitate others’ voting—such as passing out water to voters waiting in line or helping return ballots for those who require assistance. Many of these new measures disproportionately impact Black and Hispanic communities.

In the year ahead, voting rights advocates will not only need to continue challenging these restrictive laws in legislatures and courts. They will need to undertake a large and sustained mobilization campaign in communities of color. From the senatorial runoffs in Georgia in January to the 2020 presidential election to the 2017 senatorial special election in Alabama, educating voters about suppression tactics and how to overcome them has demonstrated a political reality: High Black and Hispanic turnout changes election outcomes.

On the other side of the debate are those who argue that voter fraud is the true threat to democracy. But research has clearly shown that it is exceedingly rare. And there are yet others who suggest that voter suppression is a myth, citing increased turnout among Black voters as evidence that suppression isn’t real. What they are actually witnessing, however, is not the absence of restrictive laws, but how education and Black voters’ dogged determination to participate in democracy can weaken the effect of voter suppression.

2021 showed that the desire to suppress the votes of some Americans hasn’t gone anywhere. And elections in the year ahead will likely hinge on two primary things: the work of voting rights advocates to educate the public on how to overcome the undemocratic gamesmanship happening across the country, and the unjust demand that communities of color work extra hard to cast a ballot. This is no way to run a democracy.

Theodore R. Johnson is the director of the Fellows Program at the Brennan Center for Justice.

From the nature of the killing to the alleged cover-up—the initial prosecutors declined to prosecute the killers and allegedly buried evidence that suggested that this case warranted investigation—the Ahmaud Arbery case represented a throwback to the bad old days of Jim Crow. White vigilantes, abetted by the state, were able to terrorize Black people in a demonstration of dominance to maintain a social and racial hierarchy.

Because this case looked like a throwback—augmented by a 911 call from one of the defendants that described “a Black man running down the street” as a crime, a defense lawyer trying to ban Black ministers from the courtroom and another defense attorney suggesting that Arbery could not have been out for a jog because he had “long, dirty toenails”—convicting Travis and Gregory McMichael and William Bryan was an easy call. Indeed, it was a call that most Americans agreed with. It won’t bring their son back, but I hope that the verdict gives Arbery’s parents a sense of closure.

The rest of us should not feel closure, though. It was easy to convict three vigilantes who killed a Black man in cold blood. The challenge is combatting the racism that manifests in less obvious, more nuanced cases. Are we ready to examine our standard operating procedures when we find that they routinely disadvantage racial and ethnic minorities? Just last week, CNN reported on a Black couple who used White friends as decoys to prove that appraisers devalued their home by nearly $500,000. And there is an ongoing debate about how to teach about racism in K-12 schools, reflecting ongoing debates about how much to teach about slavery, discrimination and privilege generally.

So, while we—represented by 12 brave jurors in coastal Georgia—got the verdict in the Arbery case right, we still have many other things to correct before we can absolve ourselves of America’s original sin of racism.

Andra Gillespie is an associate professor of political science at Emory University.

An illiberal minority with majority power

Now, with the latest wave of aggressive gerrymanders, and Democrats’ failure to pass comprehensive democracy reform, we are hurtling toward a likely future of minority rule. More specifically, in 2024, Democrats could well win the national popular vote for the presidency, Senate and House—and yet Republicans could still win unified control of government.

This form of minority rule is even worse than it looks. Not only would Republicans rule by representing a narrow minority of voters—mainly White conservatives—but the party would be ruled by an extreme illiberal faction with definitive minority support.

How is such minority rule possible in a modern democracy?

It’s because of our antiquated voting system that relies on single-winner, majoritarian elections. This may seem normal to many Americans who have voted under these rules their whole lives. But the consequence of these single-winner elections is that they entrench a two-party system by rendering third parties as spoilers and wasted votes. Layered on top of today’s deep urban-rural partisan split and deep identity divides, these voting rules drive our toxic hyper-partisan polarization. This system also over-represents the most rural and conservative parts of the country. And in a two-party system, a minority can rule if it is well-placed to be a majority within one of the two major parties—as the illiberal faction in the GOP now is.

As long as we maintain our two-party system, and continue the winner-take-all electoral institutions that pose steep barriers to new parties, there is no way out of this doom loop. The only path forward is transformative electoral reform: proportional representation that will open the door to new parties, and guarantee that an illiberal minority can’t gain majority power.

Lee Drutman is a senior fellow in the Political Reform Program at New America.

The GOP’s broad embrace of Islamophobia

When Colorado Rep. Lauren Boebert, a Republican, called Minnesota Rep. Ilhan Omar, who’s Muslim and a Democrat, “evil” and “blackhearted” and suggested that she was a terrorist, her comments raised nary a peep from the GOP leadership. This revealed the extent to which Islamophobia has become the norm within the party and among its base.

Trump was arguably the most Islamophobic president in US history. He ran on a platform that mixed anti-immigrant, anti-Black and anti-Muslim racism in his attacks on Barack Obama.

Trump and Fox News popularized the birtherism conspiracy theory that claimed that Obama was born in Kenya, could therefore not be president, was not Christian but Muslim, and was loyal not to the US but to Muslim states. These claims weren’t true, but they helped grow Trump’s popularity.

As he approached his presidential run, Trump explicitly relied on anti-Muslim racism. In one rally in New Hampshire, he pledged to expel all Syrian refugees, stating that they might form a secret army to overthrow the US. Once in power, he instituted a “Muslim ban” that excluded nationals from seven Muslim-majority countries.

Trump shredded the dog whistle tactics his party adopted after the civil rights movement as part of the “Southern Strategy” and legitimized blatant right-wing Islamophobia. This had long been the province of the Islamophobic network, an alliance of well-funded groups peddling conspiracy theories about Muslims.

In 2021, other Republicans continued Trump’s legacy.

In addition to the above remarks, Boebert stated that Omar was part of a “jihad squad.” Not to be outdone, Georgia Rep. Marjorie Taylor Greene called Omar “bloodthirsty” and “basically an apologist for Islamic terrorists.” The GOP leadership met these comments with deafening silence.

Deepa Kumar is a professor of journalism and media studies at Rutgers University and the author of “Islamophobia and the Politics of Empire: Twenty Years After 9/11.”