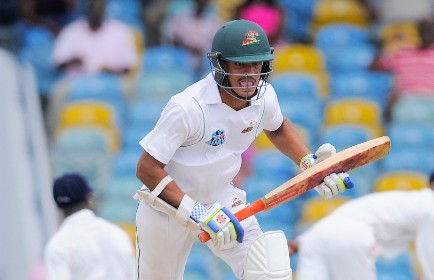 GEORGETOWN, Guyana, May 11, CMC – Tag Chanderpaul warmed up for next week’s resumption of the Regional Four-Day Championship with a polished unbeaten hundred in the final warm-up match here Tuesday.

The left-hander, son of Test legend Shiv Chanderpaul, struck 139 on day two of the contest at the Guyana National Stadium to guide his side to 245 for five in their second innings against Leon Johnson XI’s.

All told, the 25-year-old struck 18 fours and a six in an innings requiring 229 balls and a shade over five hours.

Chanderpaul’s XI trailed by 83 on first innings after being dismissed for 119 in their first innings in response to Johnson XI’s 202.

Fast bowler Ronsford Beaton, who played two One-Day Internationals for West Indies five years ago, led the attack with three for 41 while left-arm spinner Gudakesh Motie ended with three for 43 and seamer Nial Smith, two for 28.

In reply, Chanderpaul spearheaded his side’s charge, holding the innings together as top order wickets tumbled around him.

Crucially, he shared a 96-run fifth wicket stand with Savory who faced 96 balls and counted seven fours and a six.

Harpy Eagles take on Barbados Pride in the third round of the first class championship at Queen’s Park Oval from May 18-21.

They lie fourth on 21.4 points after beating Windward Islands Volcanoes by one wicket and losing to Leeward Islands Hurricanes by an innings, in their opening two matches of the tournament last February.