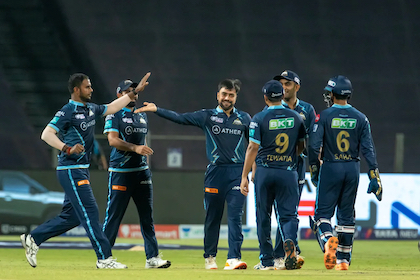 PUNE, India, May 10, CMC – All-rounder Jason Holder had a match he will want to forget when the Gujarat Titans became the first team to qualify for the playoffs in the Indian Premier League with a 62-run win against Lucknow Super Giants on Tuesday.

The lanky West Indies all-rounder was the least economical of the LSG bowlers, taking 1-41 in his four overs, and he made only one, as his side failed to chase down 145 for victory at the MCA Stadium.

LSG collapsed after they stumbled to 33 for three at the end of the powerplay with Afghanistan leg-spinner Rashid Khan destroying their batting with 4-24 in 3.5 overs.

Khan wrapped up their ninth win in 12 matches for the Titans when he got Avesh Khan caught behind for 12 with 37 balls left in the match.

Holder’s Windies teammate Alzarri Joseph failed to take a wicket and conceded 14 in two overs for the Titans.

Earlier, LSG made early inroads into the Titans batting when they dismissed India international Wriddhiman Saha and Australian Matthew Wade inside the powerplay.