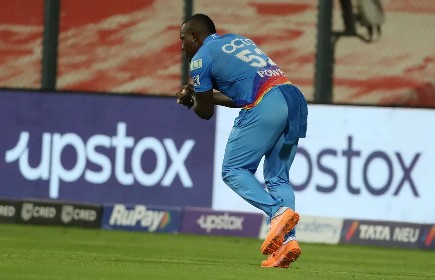 MUMBAI, India, May 11, CMC – Rovman Powell’s services were not required as Delhi Capitals romped to an eight-wicket win over Rajasthan Royals, to remain on course for the playoffs of the Indian Premier League.

In a critical fixture at the DY Patil Sports Academy here Wednesday, Capitals restricted Royals to 160 for six off their 20 overs and then overhauled the target with 11 balls to spare.

Powell, who has been excellent form of recent with the bat, was afforded the luxury of keeping his feet up as Mitchell Marsh sizzled with 89 from 56 deliveries and Australian counterpart David Warner struck an unbeaten 52 from 41 balls to steer Capitals to their sixth win in 12 outings.

Despite the defeat – their fifth – Royals remained third on 14 points, within two points of second placed Lucknow Super Giants.

Sent in, Royals rallied to 160 for six off their 20 overs with Ravichandran Ashwin top-scoring with 50 from 38 deliveries and Devdutt Padikkal striking 48 from 30 balls.

In reply, Capitals had the worst possible start when Srikar Bharat fell to the second delivery of the innings without a run on the board, but Marsh and Warner quickly turned the tables and won their side the game in a second wicket stand of 144.