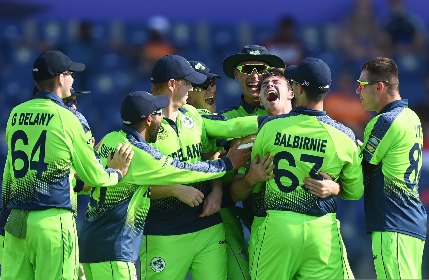 Only hours after pushing back Tuesday’s opening ODI to Wednesday as a precaution, Cricket Ireland and USA Cricket agreed to scrap the series “over COVID-related concerns”, after two members of Ireland’s support staff tested positive as well as the partners of several players.

Two players have also been categorised as “close contacts” but all players of the playing squad have returned negative COVID results.

The latest development comes on the heels of a positive test by a match official which claimed the opening match of the series carded for Boxing Day.

With Ireland scheduled to fly out to Jamaica on New Year’s Eve for the West Indies series starting January 8 in Jamaica, Cricket Ireland’s High Performance Director Richard Holdsworth said “difficult decisions” had to be taken.

“The decision has been a difficult one to make, but clearly the right outcome from a player and staff health and safety perspective,”Holdsworth said.

“While there are no positive COVID results amongst the Irish players, we have had two support staff test positive and a number of travelling partners and family members also testing positive.

“This has meant two players within our playing ranks being deemed ‘close contacts’ and have been isolating while they are further tested and monitored.”

He continued: “From a broader perspective, consideration had to be given to the current series as well as the second leg of our tour. We need to be mindful of travel requirements for entering Jamaica and meeting Cricket West Indies COVID protocols.

“Over the coming days we will prioritise the health and safety of our players and staff, and work with local officials in ensuring our people are well looked after – whether preparing to travel onward to Jamaica, or having to remain in Florida a little longer in isolation.”

The ODI series against United States, which followed a successful staging of the two-match Twenty20 International series last week, is Ireland’s final match preparation before they take on West Indies in three ODIs and a one-off T20I at Sabina Park.