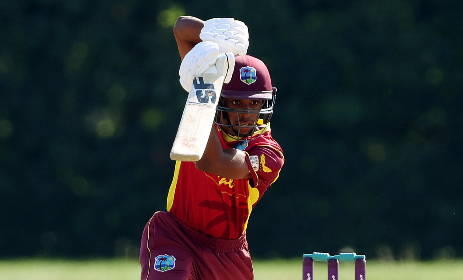 The left-hander struck a patient unbeaten 42 from 75 deliveries as the hosts overhauled a target of 104 in the 24th over at Arnos Vale Stadium to draw level in the four-match series, after a disappointing defeat in Sunday’s opener.

Nandu hit four fours, adding 58 for the second wicket with Teddy Bishop (25) before posting a further 42 in an unbroken third wicket stand with captain Ackeem Auguste who made 28 not out.

Opting to bowl first earlier, West Indies bundled out South Africa for a paltry 103 in the 32nd over, with left-arm spinner Jaden Carmichael snatching three for 25 and fast bowlers McKenny Clarke (2-12) and Johann Layne (2-14), along with left-armer Anderson Mahase (2-34) all taking two wickets each.

Michael Copeland, a right-hander with two first class matches under his belt, top-scored with 24 from 52 balls with two fours and a six batting at number six, but was one of only two top order batsmen to reach double figures and the only one to pass 20.

South Africa slumped to 12 for three in the seventh over with Layne making two early strikes, and there was no real recovery as Clarke kept the pressure on with the key wickets of Andile Simelane (14) and Gerhard Maree (9) to hurt the middle order.

Copeland’s resistance ended when he perished in the 26th over, bowled by Carmichael who took three of the last five wickets to fall.