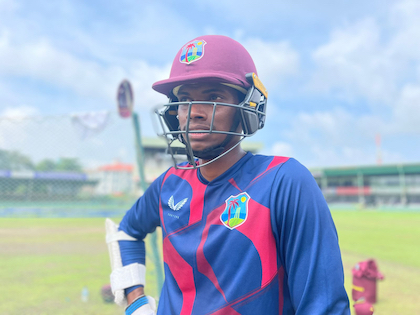 PORT OF SPAIN, Trinidad, Dec 27, CMC – More than a month after suffering a concussion when he was struck on his helmet in his maiden West Indies Test tour, left-handed opener Jeremy Solozano says he is ready to get back on the field.

He is looking forward to the regional four-day tournament which is scheduled to bowl off in February ahead of England’s tour of the Caribbean, and says he will be back “soon”, even stronger.

“I feel I am ready to be back already but I have been taking it slow and gradually building my way back up…. I have been doing a lot of work with the physio and medical team and they have been advising me accordingly. I have been listening to them,” he told the Sunday Express newspaper.

“At the time I got hit, they said I needed rest so that is what I did, but I am overcoming that phase and they have a programme and it is just for me to follow it and make my way back to 100 per cent fitness soon. I will be back stronger next year.”

Solozano was struck in the helmet near the forehead while fielding at short leg on day one of the first Test in the two-match series against Sri Lanka –his Test debut – at the Galle International Stadium on November 21, and was taken off the field on a stretcher.

He suffered a concussion and played no further part in the match and was ruled out of the second and final Test.

The 26-year-old Trinidad & Tobago Red Force opening batsman said despite not getting to bat in his first Test for West Indies, training and interacting with members of the squad had benefitted him.

“I think I gained a lot of knowledge from those other guys and that was very important because this was my first match, so I just tried to feed off them a bit and try to learn from it…. For sure experience will help me to become better and also to be mentally stronger,” he said. “Just training with those guys, I think I learned a lot,” he said.

“I also had a lot of conversations with the head coach Phil Simmons and Monte [Desai], the batting coach, and all the assistant coaches. Those guys really helped me a lot and when they see something, they will come and tell you so that you can improve your game. I think training was also very competitive and you can only learn from it and get better.”

Solozano had been a surprise selection for the two-Test series against Sri Lanka, averaging only 23 from 40 first-class matches and scoring only two hundreds.