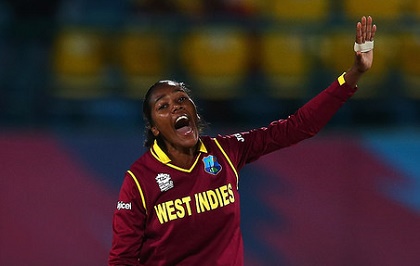 BRIDGETOWN, Barbados, Jan 9, CMC – Veteran leg-spinner Afy Fletcher has returned to professional cricket, following her year-long maternity leave, after being included in a 23-member squad for the medical and fitness camp starting here Sunday, ahead of departure for the four-match One-Day International (ODI) series against South Africa Women in Johannesburg.

Teenagers Zaida James and Jannellia Glasgow have again been included in the senior West Indies Women’s camp which runs until January 14.

However, Britney Cooper, Shabika Gajnabi and Shawnisha Hector have all been ruled out by the CWI Medical Panel for medical reasons.

Cricket West Indies’ lead selector for Women’s cricket, Ann Browne-John said the players will undergo medical and physical testing before the final squad of 18 are selected to travel.

“It is good to have Afy Fletcher back into the set-up,” she said.

The 34-year-old right-arm leg-spin bowler from Grenada, who made her international debut in 2008, has played over 100 internationals for West Indies.

Although saying it was unfortunate that Cooper, Gajnabi and Hector have been ruled out of selection consideration, Browne-John added: “What is very promising for us at CWI is the inclusion of teenagers Jannellia Glasgow and Zaida James. They’ve been a part of the senior team camps before and also played in the first-ever West Indies Women’s A Team home series against Pakistan Women last year. Their inclusion is a continued step in the developmental pathways we have established to grow women’s cricket in the region.”

The selection of the final 18 players who will travel to South Africa will be announced at the conclusion of the camp.

The series, which was recently rescheduled, will feature a warm-up match against a South Africa XI on January 25, followed by two day matches and two day/night matches under lights, against South Africa Women, from January 28 to February 6.