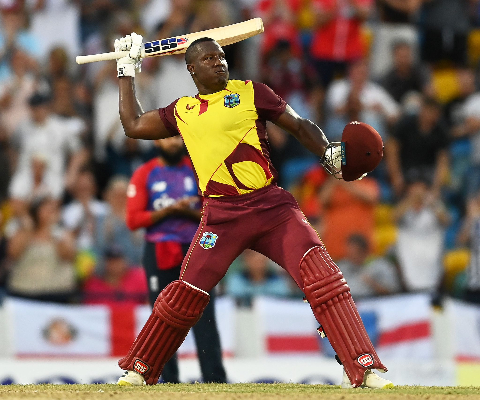 In a blockbuster of a contest on a belter of a pitch at Kensington Oval, the right-handed Powell lashed 107 off 53 balls – his maiden T20I hundred – as West Indies piled up 224 for five off 30 overs, their highest-ever total against England, third highest total overall and highest in seven years.

Left-hander Nicholas Pooran smashed 70 off 43 deliveries, combining with Powell to post an exhilarating 122 in a new West Indies record for the third wicket.

Confronted with the challenge of their second highest successful run chase, England got a scintillating 39-ball 73 from Tom Banton and a 24-ball 57 from Phil Salt – one of three debutants and five changes for the match – but fell short at 204 for nine.

Fast bowler Romario Shepherd claimed three for 59 and bowled a crucial 16th over which cost only 11 runs and pushed England’s required run rate past 15.

“Overall it was a very, very good game of cricket. Obviously we had to bat first and I think we batted and batted well,” said West Indies captain Kieron Pollard.

“Kudos to Rovman. I think he came in and took his chance. He didn’t play the first couple games and getting the opportunity now, he grasped it.”

Powell, who played only four T20 Internationals last year, arrived at the crease at 48 for two in the sixth over after Pooran had put on 37 for the second wicket with Shai Hope (4), following the second over loss of Brandon King for ten.

He immediately took the attack to England’s bowlers, depositing the second ball he faced from spinner Liam Livingstone over the ropes at deep square, and proceeding to belt four fours and ten sixes.

The Jamaican raced to his fifty off 31 balls, reaching the landmark with a six over cover off Livingstone in the 14th over which leaked 26 runs, before reaching his hundred off another 20 deliveries in the penultimate over, with a couple behind square.

He galloped into the 90s by taking 19 runs off debutant left-arm seamer George Garton in the 18th over before joining Chris Gayle and Evin Lewis as West Indies players with a T20I century.

“For the last five six months I’ve been working hard and when you work hard, it’s good to see it pay off.”

Pooran punched four fours and five sixes before perishing in the deep in the 17th over and Powell put on a further 40 with Shepherd (11 not out) before also holing out in the deep at the end of the 19th over, as West Indies gathered 71 runs from the last five overs.

In reply, Banton smote three fours and half-dozen sixes, putting on 33 for the first wicket with Jason Roy (19) and a further 46 for the second wicket with James Vince (16).

Pollard (2-31) made key strikes with his slow medium as England lost four wickets for 50 runs to slump to 129 for five in the 13th over, but Salt unleashed a late salvo lashing three fours and five sixes in a 45-run, sixth wicket stand with Harry Brook (10), to rally the run chase.

However, another clatter of wickets left West Indies with the advantage and despite a couple of sixes at the start of the final over from Shepherd, the 38 required was always a mountain too high to climb.