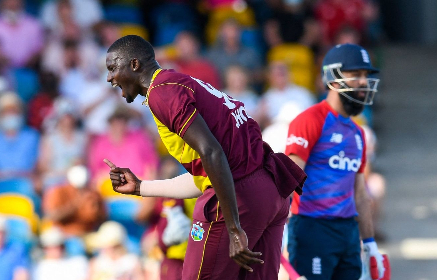 The Caribbean side thrashed the visitors by nine wickets in the opening Twenty20 International of the five-match series at Kensington Oval, the victory coming on the heels of a disappointing 2-1 series defeat to Ireland in a three-match one-day series in Jamaica last week.

“It’s great to start this series well but it’s only one game. We’ve got to play a complete series and take it game by game.”

Opting to bowl first on a helpful surface, West Indies sent England crashing to 103 all out in the final over, the visitors’ lowest total on Caribbean soil and fourth lowest ever.

In reply, opener Brandon King stroked an unbeaten 52 – his second fifty in three innings – as West Indies strolled to their target with 17 balls remaining.

“If there’s a secret [to the way we played] I would like to know it so we can continue on in this vein,” Holder joked.

“I think everything just clicked for us. Things went our way today and the guys really ran with it. I think in the past we probably would’ve eased up a bit but I was really happy to see the guys still keeping the pedal to the metal and trying to finish the innings off. I think that was commendable by every individual.”

Holder proved devastating with the new ball, removing Tom Banton (4) and Moeen Ali (0) with successive deliveries at the end of the second over, as England slumped to 26 for four at the end of the opening power-play.

The 30-year-old returned at the back end of the innings to account for Saqib Mahmood (5) and Adil Rashid (22) in the final over, and ensure there was no strong finish from England.

“It’s a great achievement. Regardless of where I am playing, I just want to do my best for the team,” Holder pointed out.

“The last couple performances for me personally haven’t gone according to plan. I’ve been working on trying to add a few things to my game and it was just good to see it click for me tonight.

“I still think I have a lot of work left to be done and for me, it’s about just keep working hard. The hard work never stops; the game keeps moving so I just need to continue moving with the game.”

He added: “I found probably two years ago that my game wasn’t where T20 cricket had moved to and for me, I just needed to add a few things to the arsenal.

“So I just went into the nets and worked really hard on different deliveries and on just being adaptable in each bit of conditions that we may face.”