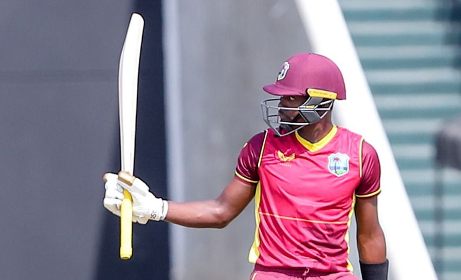 KINGSTON, Jamaica, Jan 9, CMC – Despite missing out on a century on his One Day-International (ODI) debut, Shamarh Brooks is satisfied with his performance in Saturday’s match which West Indies won against Ireland at Sabina Park.

However, the Player of the Match admitted he could have played the ball that got him out at 93 after 89 deliveries, differently.

After being dropped on 92 at the start of the 45th over in the opening match of the CG Insurance ODI Series, Brooks perished lbw to medium pacer Mark Adair in the 36th over.

“In hindsight, now, looking back on it, I probably should have stayed on the front foot,” he said in a post-match interview. “There was a big space or a big gap on the leg side with the field that the bowler had set, so that’s the only real change I would make, instead of going back on the back foot, pressing forward on the front foot.”

However, the Barbadian said, “at the end of the day, it was my first game, and I am still happy with the score that I got”.

“Unfortunately, I didn’t get those three figures. I wouldn’t say I panicked in the nervous 90s. Some people would probably end up being a little too cautious after being set, but as we all know, it’s a learning curve at this level, and I’ll take this one on the chin and look to go from strength to strength,” added the elegant right-hander.

Brooks hit nine stylish fours and three equally polished sixes on his way to his 93.

The 33-year-old who made his Test debut in 2019 and began his limited-overs career with last month’s Twenty20 International (T20I) series against Pakistan, said his role in white-ball cricket is to “rotate the strike in terms of the middle overs”.

“We’ve always produced guys who can hit the ball over the rope, so for me, it’s just to really come in and play my part in the middle overs – especially in a situation like [Saturday] where we lost early wickets – and get the innings going again, then continue with a flurry at the back end,” he added.

Brooks’ brilliant batting display which featured in a record century stand with captain Kieron Pollard, helped West Indies to 24-run victory against Ireland in the first of three ODIs.

West Indies play the other two matches on Tuesday and Friday. The teams will also play a T20I next Sunday at the same venue.