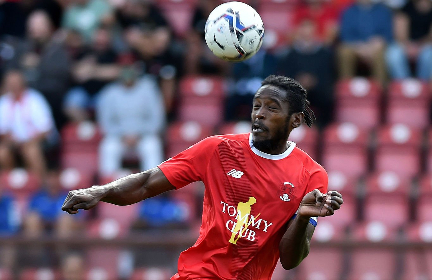 Centre-back Beckles, 30, dealt Swindon’s play-off hopes a blow by scoring either side of the break. On-loan Charlton Athletic striker Josh Davison pulled a goal back with a late strike, but the visitors took maximum points.

Beckles scored against the run of play on 20 minutes, rising highest in the box to connect with Theo Archibald’s free-kick, but four minutes later Orient’s Hector Kyprianou was shown a second yellow card by referee Sam Allison for bringing down Louie Barry.

Tempers threatened to boil over 10 minutes before half-time with an on-pitch scuffle involving players and managers, resulting in six yellow cards being shown.

The visitors doubled their advantage on 54 minutes through Beckles as he stabbed the ball past goalkeeper Joe Wollacott to take his goal tally for the campaign to six.

Reggae Boy Jamal Lowe was also on target as Bournemouth strengthened their grip on second place in the Championship with a 3-0 win at Coventry City.

Lowe, a 27-year-old forward, adjusted superbly to power home a header off the underside of the bar, from an Adam Smith cross which was slightly behind him, to give Bournemouth a 12th-minute lead – his seventh goal of the season – before Dominic Solanke added two more after the break.

Meanwhile, Jamaican striker Jamille Matt ended a 16-game goal drought as League Two leaders Forest Green Rovers moved to the cusp of promotion with a 2-0 win over lowly Oldham Athletic after bouncing back from a crushing 4-0 defeat at Barrow on Good Friday.

Regan Hendry put Forest Green ahead on eight minutes before 32-year-old captain Matt pushed Oldham deeper into relegation trouble with a second on 41 minutes, nodding in from a Nicky Cadden cross.

It was Matt’s 19 goal of the season, but his first since Forest Green won 4-0 at Tranmere Rovers on January 29.

Matt should have made it 3-0 after Will Sutton lost possession, but he squandered the chance with just goalkeeper Danny Rogers to beat.

Rob Edwards’ team now require only a draw at high-flying Bristol Rovers on Saturday to confirm promotion to League One for the first time in the club’s history.

Another Jamaican striker, Junior Morias, scored his fifth goal in three games as Dagenham & Redbridge enhanced their promotion hopes from the fifth-tier National League with a 2-0 win at Aldershot Town.

Morias gave Dagenham a 27th-minute lead when he linked up with Mauro Vilhete and lifted the ball over goalkeeper Ethan Ross.

It was 26-year-old striker Morias’ 12th goal of the season following his hat-trick on Friday in a 7-3 win over Barnet.