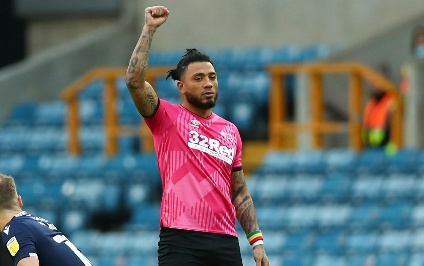 Having already beaten promotion hopefuls Stoke City and leaders Bournemouth on home soil, the up-for-sale Rams, who are struggling at the bottom of the table after being docked 21 points, again upset the odds to beat the out-of-sorts Baggies.

Both sides were missing key players because of COVID-19 protocols.

Derby’s sixth league win of the season came thanks to a second-half defensive howler that gifted 35-year-old forward Kazim-Richards his second goal of the season, a minute after he came on after 57 minutes.

In attempting to head the ball back to Sam Johnstone, Cedric Kipre did not realise until too late that the Albion goalkeeper had left his area and his header rebounded off Johnstone into the path of Kazim-Richards, who fired into an empty net from 20 yards.

Derby sealed all three points when Ryan Allsop made a stunning late point-blank save to keep out Kyle Bartley’s injury-time header, victory lifting Derby to within 14 points of safety at their halfway point of the season.

Manager Rooney said: “I could see something happening between the defender and the goalkeeper. Them getting so close to each other, you hoped it would fall for us. It did and he [Kazim-Richards] put in a nice finish.

“The administrators have confirmed they have had bids from other companies and it needs to be done before January. I’m trying to plan for the future of this club and if it keeps dragging on, it’s not helpful to anyone. So really this next week is pivotal.”

Derby were deducted nine points after admitting breaches of English Football League accounting rules. They had earlier been docked 12 points for entering administration in September.