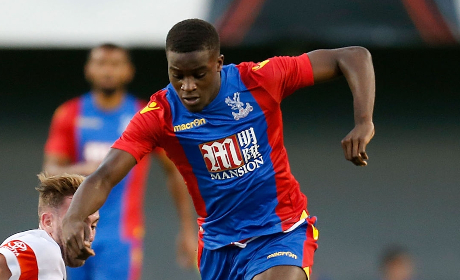 LONDON, Dec 18, CMC – Grenada international Jacob Berkeley-Agyepong helped steer Aldershot Town into the next round of the English FA Trophy on Saturday with a second-half goal in a 2-1 win over Kingstonian.

UK-born Berkeley-Agyepong, a  24-year-old attacking midfielder who made his debut for the Spice Boyz in July, levelled for Aldershot in the 53rd minute before a Simon Cooper own goal sent them through.

In other third Trophy matches, Montel Gibson, 23, who is of St Kitts and Nevis descent, bagged a brace in the 53rd and 89th minutes as Stourbridge defeated AFC Telford United 3-2, while Kwame Thomas, 26, who is of Jamaican descent, joined in Wrexham’s 5-0 rout of Gloucester City with a 56th-minute goal.

Lewis Grabban, 33, who was called up to the Jamaica squad in 2015 but remains uncapped, scored his 10th goal of the campaign – a 55th-minute penalty – as Nottingham Forest bounced back to beat Hull City 2-1 in the Championship.

The equaliser from team captain Grabban came after Keane Lewis-Potter gave Hull an interval lead and the hosts deservedly went ahead when Brennan Johnson superbly chested down Grabban’s cross from the right and calmly side-footed home from six yards.

Forest’s head coach Steve Cooper said: “We started the second half really well, and we kept the momentum going in the game with a brilliant goal from Lewis’s assist and Brennan’s composure in a tight area.”

Seventh-placed Forest extended their unbeaten run to nine matches with a third successive victory while Grant McCann’s side were beaten for the first time in seven games and stay 19th, four points off the relegation places.

In League One, Kieran Agard, 32, who is eligible to play for Jamaica, St Vincent and the Grenadines or Dominica, fired home fifth-placed Plymouth Argyle’s winner in first-half injury time in a 1-0 triumph over Charlton Athletic as Steven Schumacher celebrated his first success in his third game in charge of the Pilgrims.

Argyle’s top scorer Ryan Hardie forced Charlton goalkeeper Craig MacGillivray to go full stretch to keep out his angled goal-bound shot. The ball rebounded to Hardie’s strike partner Agard, who scored with a superb low shot in off a post from the edge of the box for his third goal of the season.

Wilson, 24, who is of Jamaican descent, slotted home the only goal of the game on the half-hour mark after Omar Bugiel expertly slipped him in.

Matt Gray’s side, playing in the English Football League for the first time in their 123-year history, took full advantage of games being called off because of COVID-19 outbreaks to go third.

Dominic Poleon, 28, who is of St Lucian descent, scored in the 46th minute as Ebbsfleet United defeated Bath City 3-0 in the sixth-tier National League South.