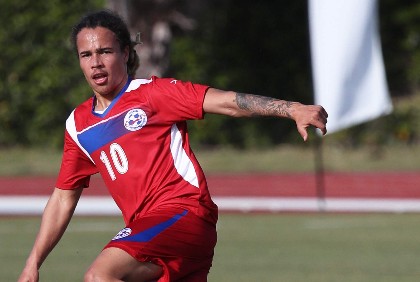 Detective Chief Inspector Peter Stableford told a news conference at the scene that no one who was present had given any police information about the incident.

“It was established that an incident took place outside Fun Zone in St David’s, where a party was being held and we believe an altercation occurred that led to Osagi’s death. At present we need to hear from anyone who was at the party but right now, persons who were here are not talking to us,” he said.

“We know that people saw what happened and I would urge them to do the right thing by Osagi and tell us.”

Stableford added that early indications suggested the stabbing was not gang-related.

A Bermuda Police Service spokesman had said that officers were at King Edward VII Memorial Hospital in connection with another matter, when Bascome was brought into the emergency department in a non-responsive state, with what appeared to be multiple stab wounds. He had been transported there via private vehicle but succumbed to his injuries.

Bascome, whose father Herbie is Bermuda’s national cricket coach, made his Bermuda debut in 2016, was a member of the island’s 2019 CONCACAF Gold Cup team, and also had a stint playing in England for Darlington, nicknamed the Quakers. He played domestically for St George’s Colts.

He joined English National League North outfit Darlington in March 2019 on a deal until the end of the season. His deal was extended into the following season, and he started six league matches, but he gradually dropped out of first-team contention and left the club by mutual consent in February last year.

Though not always a regular during his 11 months at Blackwell Meadows, he will always be remembered by Quakers fans for his integral role in a dramatic equalising goal against Walsall, the Northern Echo newspaper said.

“It was from his free-kick that Joe Wheatley scored deep into stoppage time to earn a 2-2 draw in the FA Cup in November 2019,” it said.

Former Quakers teammate Justin Donawa, a fellow Bermudian now at National League Solihull Moors where he is recovering from a broken ankle, tweeted two photographs of himself alongside Bascome, and said: “He never knew how much he kept me going at times.”