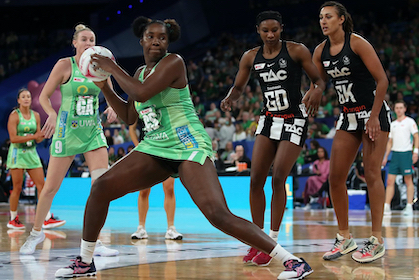 MELBOURNE, May 10, CMC – Experience got the better of youth when Jhaniele Fowler outscored fellow Jamaican goal shooter Shimona Nelson to catapult leaders West Coast Fever to a come-from-behind 74-69 win over Collingwood Magpies in the Super Netball League on Sunday.

With nothing between the two teams after they traded goals in the first half, Fowler and her circle partner Sasha Glasgow at goal attack sprang to life in the dying minutes at RAC Arena to take the Fever over the finish line.

Fowler ended with 61 goals from 63 attempts, and Nelson netted 54 from 61, but for a handful of errors in the final quarter, the Magpies looked every bit as good as the Fever.

Fever top the standings with 24 points – the same number for Melbourne Vixens – but the West Coast side have a superior goal scoring percentage at the moment.

Just as the Fever threatened to creep ahead late in the third quarter, Nelson and goal attack Sophie Garbin adjusted their radars to send the Magpies on a 5-0 run to pinch a two-goal lead of 54-52 at the final change.

For the Fever, it all came down to the last five minutes when their coach Dan Ryan pleaded with his players to be more aggressive.

Trailing by four, English goal defence Stacey Francis-Bayman intercepted a risky pass from Garbin to tip momentum in favour of the Fever.

Glasgow had been quiet throughout the match, but she sank a pair of two-point super goals when the pressure was at its most intense to ease the tension on the hosts.

The classy Magpies, whose line-up also included Jamaican goal defence Jodi-Ann Ward, had their chances too, but the Fever won the critical moments to teach the visitors a few lessons about composure.

Ward ended the affair with one interception and four gains, but she was guilty of committing 14 penalties.

Four-time champions Adelaide Thunderbirds with the Jamaican defensive pair of Shamera Stirling and Latonya Wilson on court returned to their winning ways after losing their past five matches when they beat Sunshine Coast Lightning 51-44 on Saturday at USC Stadium.

“It’s good to get intercepts when they’re capitalised (on) by your shooters,” Sterling said after the Thunderbirds leapfrogged the Lightning into fifth in the ladder.

“We came here with the mindset that we wanted to win and take off some of that ladder pressure. As of now, it’s just a deep grind to get into that top-four spot.”

With Sterling starring, the visitors took a 13-10 edge at the first break as the well ran bone-dry for the Lightning, who went scoreless for more than six minutes either side of quarter-time.

The buffer blew out to nine goals early in the third stanza, but the Thunderbirds were penalty-prone and turnover-riddled, and the Lightning, whose squad includes Jamaican defender Kadie-Ann Dehaney, trimmed the deficit to three goals.

The T-birds responded and stretched their advantage back out to 39-31 at the final change, but the Lightning mounted one more charge in the fourth quarter, only for poor shooting to come back and haunt them.

A 5-0 goal spree from Thunderbirds goal shooter Lenize Potgieter inside the last three minutes put the home team away for good.