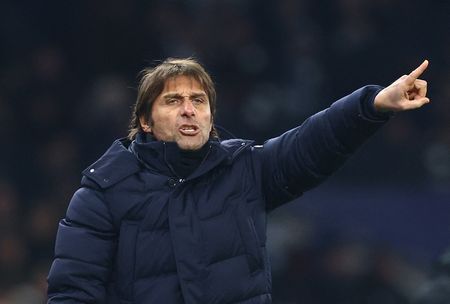 (Reuters) – Tottenham Hotspur manager Antonio Conte said he is relishing the opportunity to face former club Chelsea in the League Cup semi-finals after his side moved a step closer to ending their 13-year trophy drought with a 2-1 win against West Ham United.

Tottenham, runners-up to Manchester City in the competition last season, made it to the semis thanks to first-half goals by Steven Bergwijn and Lucas Moura on Wednesday.

Conte guided Chelsea to the Premier League title in the 2016-17 campaign and the FA Cup crown the following season.

“For sure it’ll be nice to play against Chelsea for me,” Conte told reporters. “I spent two amazing seasons with Chelsea and enjoyed everything there, but now I’m the manager of Tottenham and I’m ready to give everything for this club.”

Arsenal face Liverpool in the other semi-final and Conte said at this stage of the competition there is no easy draw.

“When you reach the semi-final, for sure in England to lift the trophy is very difficult. You find Chelsea, Liverpool and Arsenal, then Tottenham.

The semi-finals are scheduled to be played over two legs in January.

The last major trophy claimed by Spurs was the 2008 League Cup, when they beat Chelsea in the final.

(Reporting by Shrivathsa Sridhar in Bengaluru; Editing by Peter Rutherford)