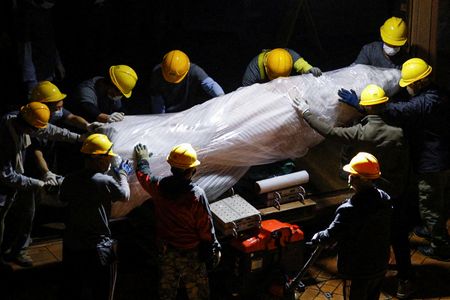 HONG KONG (Reuters) – It was close to midnight when Reuters photojournalist Tyrone Siu spotted chatter among students in an online forum that a statue seen as a symbol of Hong Kong’s freedoms was being covered up by construction workers.

The University of Hong Kong (HKU) said earlier this year it wanted to remove the “Pillar of Shame” statue from its campus. The artwork of dozens of torn and twisted human torsos, commemorating democracy protesters killed during China’s 1989 Tiananmen Square crackdown, had stood in the campus for over two decades.

But until Wednesday night, the university hadn’t acted on removing it.

When Siu, 34, arrived at the campus, the site of the statue was draped on all sides in white plastic sheets and surrounded by tall yellow barricades. Siu said he heard loud, metallic noises suggesting the eight-metre (26-foot) high, two-tonne copper sculpture would not remain there for much longer.

He said he repeatedly tried to reach several viewpoints on the ground and on higher levels in the campus, only to be shooed away by security guards.

Siu left the campus and climbed for 10 minutes in a steady drizzle and in the dark up a muddy hill nearby.

He and other journalists stayed there for five hours, until dawn broke. Then, workers emerged from the closed off area moving pieces of the statue towards a shipping container, as photo cameras clicked away from the hill about 50 metres away.

Siu shot several photographs, including one of around a dozen workers wearing yellow helmets, the type that pro-democracy protesters wore in 2019 during mass anti-government demonstrations, rolling what appeared to be the tip of the statue, wrapped up like a mummy.

“I didn’t think a lot about what I was shooting, because it was hard to see and I was very tired. I just felt lucky that something was finally moving,” said Siu, who who was part of a Reuters team awarded the Pulitzer Prize for Breaking News Photography in 2020 for coverage of the Hong Kong protests.

“Only after seeing it again on my camera I realised it looked like they were carrying a dead body.”

That picture was widely shared on social media and was picked up by global news outlets, including the Washington Post and the BBC.

The statue had been seen as a key symbol of the wide-ranging freedoms promised to the former British colony at its 1997 return to Chinese rule. Its removal was seen as a sign of Beijing’s tightening grip on Hong Kong.

Tiananmen is a taboo topic on the mainland, but Hong Kong has traditionally held the largest annual vigils in the world to commemorate the crackdown. Before every vigil, students and activists would wipe the statue clean and lay candles nearby.

China responded to the 2019 demands for greater democracy in Hong Kong by imposing a sweeping national security law and “patriots-only” rules for the city’s institutions.

Most opposition activists and politicians have been jailed under the new law or other alleged crimes or have fled into exile. Hong Kong and Chinese authorities say the law has restored stability after a year of unrest.