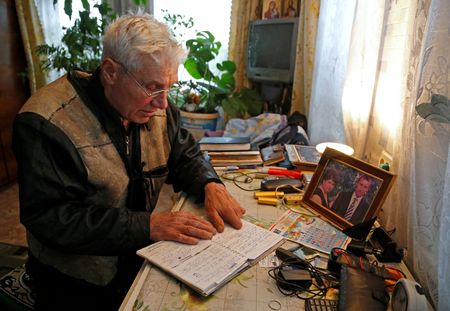 ALEXANDROVKA, Ukraine (Reuters) – From his cramped living room, Alexander Cherkas keeps track of the war in eastern Ukraine that has been waged around him for the past seven years and eight months.

In a small exercise book, the 77-year-old electrician writes out by hand a line-by-line record of shelling attacks and casualties – which buildings were hit, who was killed, who was wounded.

“Sooner or later, you may need proof: this is what happened, or didn’t happen, during the war. This is why I write it down: it’s history. And history is fair and trustworthy,” he said, running a finger across a page of entries.

Like many people caught up in the conflict between Ukrainian government forces and Russian-backed separatists, Cherkas has ties to both nations – his mother was Russian and his father Ukrainian. “My soul is both, Ukrainian and Russian,” he said.

He has a Ukrainian passport, but his first language is Russian.

But living on the edge of Donetsk, one of the two main strongholds of the separatist side, he says his allegiance is firmly with Russia. He gets his news from Russian state TV on a set in the corner of the room with a miniature triptych of icons perched on top.

No surprise, then, that he disbelieves the Ukrainian government’s warning that Russia has more than 90,000 troops near the Ukrainian border and may be poised for a full-scale invasion – something the Kremlin denies.

Russia “has never intended and is not going (to invade), because she has enough on her plate already,” he said. “Russia does not need to take on this burden of Ukraine too – why would it?”

Russia rejects Ukrainian and U.S. accusations that it may be preparing an invasion of Ukraine as early as next month by tens of thousands of Russian troops poised within reach of the border.

Cherkas’ conversation veers between vitriolic condemnation of the government in Kyiv and talk of possible reconciliation.

On a table stands a tragic personal memento of the war. A photograph, tied neatly with black ribbons across two corners, shows his son and daughter-in-law, killed by shelling on the same day in January 2015.

Like others interviewed by Reuters in recent weeks on either side of the front line in Ukraine, Cherkas said he hopes for peace. “Who cares what language you speak – the most important thing is that there should be friendship, equality and brotherhood, right?”

In the meantime, though, he is still adding to the entries in his logbook. A recent one shows the death of one separatist fighter and the wounding of another in the village of Trudovskiye, several days after Russian President Vladimir Putin and U.S. President Joe Biden held a video call to discuss the Ukraine crisis.

Cherkas says he and his wife are too old to get frightened – but they also know they are trapped. “There’s nowhere here to hide if war breaks out.”