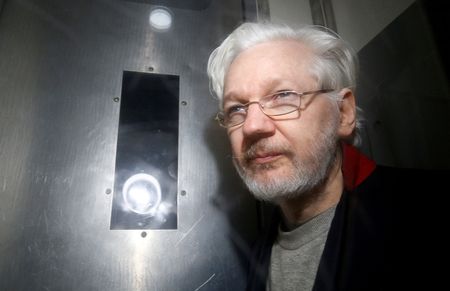 LONDON (Reuters) – WikiLeaks founder Julian Assange on Thursday filed an application to appeal to Britain’s Supreme Court against a lower court’s ruling this month that he can be extradited to the United States.

U.S. authorities accuse Australian-born Assange, 50, of 18 counts relating to WikiLeaks’ release of vast troves of confidential U.S. military records and diplomatic cables which they said had put lives in danger.

On Dec. 10, Assange moved a step closer to facing criminal charges in the United States after Washington won an appeal over his extradition in London’s High Court.

The court said it was satisfied with a package of assurances given by the U.S. about the conditions of Assange’s detention, including a pledge not to hold him in a so-called “ADX” maximum security prison in Colorado and that he could be transferred to Australia to serve his sentence if convicted.

The Supreme Court is the United Kingdom’s final court of appeal.

Assange’s fiancée, Stella Moris, said the High Court’s ruling raised three points of law of general public importance that have an impact on the procedural and human rights safeguards of a wide range of other types of cases.

“Under English law, in order for the application to have a chance to be considered by the Supreme Court, first the same High Court judges who ordered Julian Assange’s extradition must certify that at least one of the Supreme Court appeal grounds is a point of law of general public importance,” she said in a statement.

She said the application for leave to appeal is currently under consideration by the High Court judges. A decision is not expected before the third week of January.