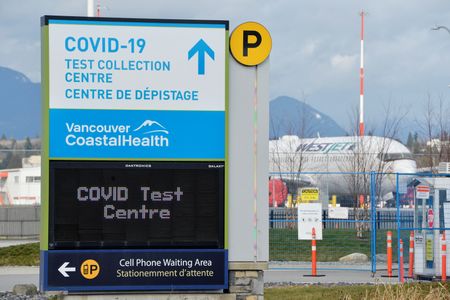 (Reuters) – British Columbia will shut gyms, bars and nightclubs while allowing fewer people at tables in restaurants and cafes through the Christmas holiday period to curtail the spread of COVID-19, the Canadian province’s government said on Tuesday.

The temporary restrictions, to take effect on Wednesday and stay in place until Jan. 18, also include a ban on all indoor social events and gatherings, and a capacity limit of 50% for all concerts, sports games and theatres.

Coronavirus infections are rapidly increasing in Canada, with several of the 10 provinces reporting big jumps as Omicron replaces Delta as the dominant variant.

“COVID-19 cases continue to increase at a concerning rate, and we must take stronger measures to help protect British Columbians and ensure our health-care system is there when people need it,” said the province’s health minister Adrian Dix.

The neighbouring province of Alberta, where cases are also rising, said it would restrict attendance in venues that can hold more than 1,000 people to 50% capacity, a move that will also apply to National Hockey League games and the World Junior Hockey Championship, which begins on Dec. 26.

Montreal, Canada’s second-largest city, declared a state of emergency earlier on Tuesday to combat the virus.

Quebec, Canada’s second most populous province, has also shut bars, gyms and casinos, and ordered people to work from home to try to reduce the rapid spread of the Omicron variant.

(Reporting by Ismail Shakil in Bengaluru and Rod Nickel in Winnipeg; editing by Grant McCool)