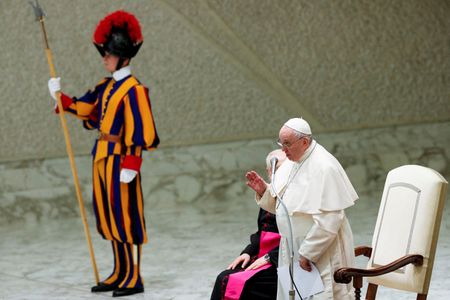 VATICAN CITY (Reuters) – Pope Francis told Vatican administrators in his annual Christmas greetings on Thursday to be humble but spared them the blistering critique of the bureaucracy he has served up in previous years.

In an address to the Curia, as the Catholic Church’s central bureaucracy is known, he used the word “humility” nearly 30 times, but his approach was notably softer than in the past.

He said the administrators, including cardinals and bishops as well as lower-level staff, should not remain “closed in their own little world,” form cliques, or feel they are indispensable.

They should, instead, stick to a sober lifestyle as they help him administer the 1.3-billion-member Roman Catholic Church from its headquarters in the Vatican.

“Only by serving, and by seeing our work as service, can we be truly helpful to everyone. We are here – I myself before anyone else – to learn how to kneel and adore the Lord in his humility, not other lords in their empty trappings,” he told the administrators gathered in a Vatican hall.

“The moment comes in each individual’s life when he or she desires to set aside the glitter of this world’s glory for the fullness of an authentic life, with no further need for armour or masks,” he said.

The pope has used the occasion in the past to list what he called the “illnesses” and “diseases” of the Vatican’s central bureaucracy.