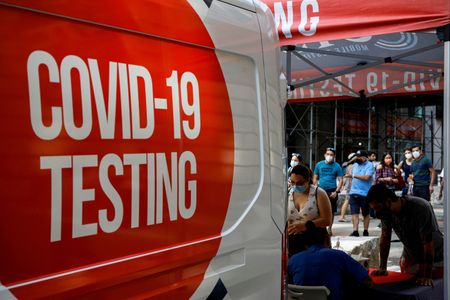 AMSTERDAM (Reuters) – Belgian researchers on Tuesday issued a pre-holiday warning against over-reliance on COVID-19 rapid antigen tests, saying they believed the breath of people infected with the disease had high levels of virus in the first two days after an infection — a period when many antigen tests were negative.

The organizations involved said they were communicating their findings in advance of a peer-reviewed publication in the interests of public health, as many families may be planning to use antigen tests as a way of screening for illness before family gatherings.

“A negative rapid antigen test just before a meeting offers no guarantee to protect others, in particular when the person tested has recently been exposed to the virus,” said Emmanuel Andre, a microbiologist at KU Leuven, which conducted the research together with UZ Leuven, a university hospital, and IMEC, a microelectronics think-tank.

Scientists were already aware that exhaled particles are key in spreading the virus, but finding high levels of virus at the start of an infection was surprising and is a “first indication” the virus may be transmitted very early in an infection, Andre said.

“A negative antigen test should not replace self-isolation when the chance of developing the disease is high, such as during the first 7 days following a high-risk contact,” he said.

In their study, researchers took 58 people who had been in close proximity with someone who was infected, and tested them regularly over a two-week period with multiple types of tests.

Of the 58, 11 later developed COVID-19. However, during the first two days of their infection, antigen tests failed to detect it half the time. PCR tests obtained by nose swabs reliably detected the disease. The aerosol tests, which are a type of PCR test that works by collecting breath and testing it on a specialized silicon chip, showed high virus levels in breath as early as the first day after an infection.