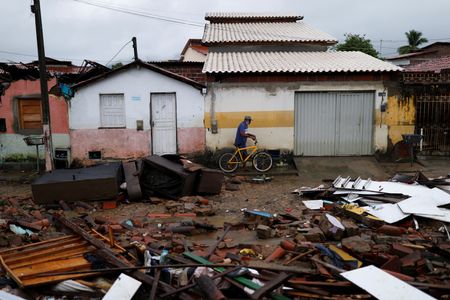 By Ricardo Brito and Gram Slattery

BRASILIA/RIO DE JANEIRO (Reuters) – The Brazilian government has allocated 200 million reais ($35.5 million) in disaster relief funds to northeastern Brazil, where 20 people have died and tens of thousands have been displaced amid severe flooding, according to a Tuesday presidential decree.

Brazil’s Bahia state, home to about 15 million people, has suffered from floods for weeks, after a historic dry spell gave way to record rains. The situation deteriorated significantly late on Christmas Eve, as many residents were forced to abandon their homes for higher ground after a pair of dams gave way, and rains are expected to continue in many regions throughout the week.

Bahia Governor Rui Costa told journalists nearly 50,000 people had been displaced and 5,000 new homes would need to be constructed at the cost of 400 million reais.

“The depredation is immense,” he said. “It looks like Bahia has been bombarded.”

For days, dramatic scenes of rescue workers pulling residents from second-story windows have unfolded across vast swatches of Bahia state.

State firefighters said in a statement on Tuesday afternoon they were ordering the evacuation of neighborhoods in four municipalities amid “imminent risk of floods.”

Brazilian President Jair Bolsonaro, who is currently vacationing in the southern state of Santa Catarina, announced the relief aid on Twitter early Tuesday.

“We’re waiting for a more detailed evaluation (of the damage) to see what’s needed, and we’ll do what’s necessary,” he told journalists.