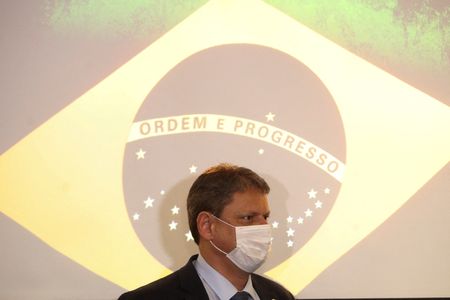 In televised remarks to journalists outside the presidential palace in Brasilia, Bolsonaro said Freitas would run on the ticket of the center-right Liberal Party (PL), which Bolsonaro joined in November https://www.reuters.com/world/americas/bolsonaro-join-center-right-pl-party-take-leftist-lula-2021-11-08.

“It’s certain that Tarcisio will be our candidate,” he said.

Bolsonaro’s government is deeply unpopular in Brazil due in part to his laissez-faire handling of the COVID-19 pandemic and rising inflation. Freitas, however, is widely considered one of the most popular and competent members of the current government, largely due to dozens of successful concession auctions that have been carried out in recent years.

Sao Paulo’s current governor, Joao Doria, won the primary election https://www.reuters.com/world/americas/governor-doria-wins-bid-run-brazils-presidency-polls-show-him-far-behind-2021-11-27 in November for the broad-based Brazilian Social Democracy Party to run for president in 2022, but surveys currently show him polling in the low single digits.