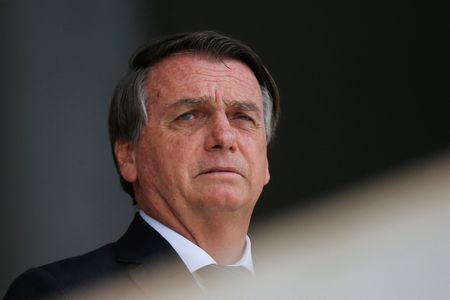 BRASILIA (Reuters) – Brazilian President Jair Bolsonaro will not vaccinate his 11-year-old daughter against COVID-19, he said on Monday, maintaining the firm anti-vaccine stance that has drawn criticism from public health experts and hit his poll numbers.

The right-wing leader added that the nation’s health minister, Marcelo Queiroga, will divulge on Jan. 5 the manner in which Brazil will carry out its coronavirus vaccination campaign for 5 to 11-year-olds, which was approved earlier this month.

“Children have not been dying in a way that justifies a vaccine for children,” he told reporters in the southern state of Santa Catarina.

Vaccination of children has been a hot topic in Brazil, where Bolsonaro’s core supporters have fervently opposed the measure, even as the vast majority of the population supports vaccines.

In October, national health regulator Anvisa said its workers had received death threats regarding the issue. When Anvisa approved shots for 5 to 11-year-olds, Bolsonaro provoked controversy by saying he wanted to make public the names of the officials who had signed off on the approval.

On Dec. 23, Queiroga, the health minister, provoked further controversy by saying that the number of COVID-19 deaths among children did not justify an emergency authorization. He later said that coronavirus vaccines for children would require a doctor’s prescription, which state health secretaries immediately contradicted.

“I’ve talked with Queiroga about this. On the 5th, he should published a note about how vaccinating children should be carried out,” Bolsonaro said. “I hope there’s no judicial interference. I hope. Because my daughter isn’t getting vaccinated, let me make that very clear.”

A government coronavirus advisory body released a note saying that 301 children between the ages of 5 and 11 have died of COVID-19 in Brazil.

Bolsonaro himself has refused to get vaccinated and has repeatedly called into question the safety and efficacy of coronavirus vaccines.