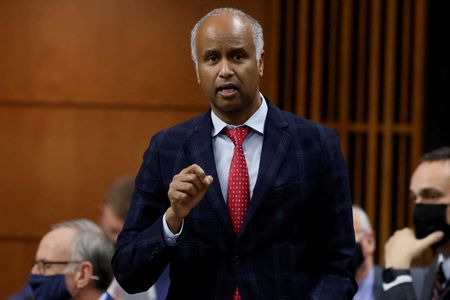 Ahmed Hussen told Reuters in an interview that housing should be for Canadians to live in, not passive foreign investment, and that he backs Canadian cities implementing density measures like those recently rolled out in New Zealand, which allow up to three homes to be built on most single-family lots.

“I support that,” he said. “That’s one of the ways to easily increase housing supply by using the same land for single-family dwelling and creating more units.”

“Any measure that increases the housing supply, that intensifies the use of land, that builds more housing and that frees up more housing on the same amount of land, is a good thing,” he added.

Canada is grappling with a national housing crisis, as surging demand tied to the COVID-19 pandemic has sprawled beyond big cities and into smaller centers, which are unable to keep up with supply.

A typical home in Canada now costs C$780,400 ($603,791), up 25.3% this year and by 81.4% since November 2015, when Prime Minister Justin Trudeau’s Liberals took power. Home price gains in smaller centers have outpaced those in large cities during the pandemic.

Trudeau, who won his third term in September, has promised new measures to improve housing affordability, including a temporary ban on foreign buyers and 1.4 million new or refurbished homes over four years.

Hussen said he supports the foreign buyer ban, but did not provide any details on how and when it would be implemented, deferring to Finance Minister Chrystia Freeland.

Hussen noted a 1% tax on foreign-owned vacant or underused real estate would take effect on Jan. 1 and said the Liberal government is working hard to get other taxes, like an anti-flipping tax, in place as soon as possible.

“This will enable us to reduce the speculative demand in the marketplace. It’ll help cool excessive price growth,” he said.

Those two measures alone will cost taxpayers C$4.2 billion over four years, according to Trudeau’s election platform. They have not been officially budgeted as yet.

But critics worry first-time buyer supports will drive up home prices, unless coupled with measures to tamp down demand. Hussen will study measures like larger down payments for investor owners, but gave no timeline for completing that work.

“This has been dealt with by other countries,” he said. “And it’ll be interesting to see what are some of these measures that they implemented and what results have they had.”

(Reporting by Julie Gordon in Ottawa; Editing by Peter Cooney)