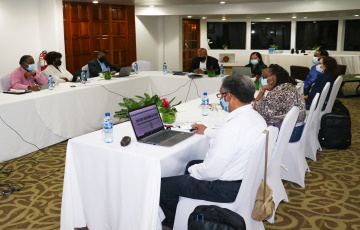 In a statement issued here Monday, the CCCCC which is mandated to coordinate CARICOM’s response to climate change, said its board of governors discussed the implications of the outcome of the COP26 for CARICOM.

“The Board noted that while the Glasgow Pact signalled a reckoning with the urgency of raising ambition around greenhouse gas emissions reduction and accelerating implementation of actions to maintain global warming below 1.5°C, in line with the best available science, the decisions reached at COP26 only afford a very narrow window of opportunity to keep that goal within reach.”

The CCCCC said moreover, the ongoing process required for keeping global warming below 1.5°C will demand strong and global political commitment towards achieving this goal.

The CCCCC board said that “the COP26 outcomes did not meet, in the main, the region’s preCOP26 expectations.

“With increasing climate impacts already being felt worldwide, particularly so among Small Island Developing States (SIDS), and the findings of the Intergovernmental Panel on Climate Change (IPCC) Sixth Assessment report that these impacts will worsen with every fraction of a degree of warming, CARICOM States expected major emitters to step up their near-term 2030 emissions pledges and to do so in line with the science of 1.5°C and the pursuit of the net zero target by 2050.

“In addition, CARICOM expected major emitters to urgently scale up their support to enable the far-reaching systemic transformation of economies and societies toward low emission climate resilient development pathways.”

The CCCCC said that more than 140 countries at COP 26 announced net zero goals, but without strengthened 2030 targets, 1.5°C of global warming “will be ‘locked in’ for this decade with devastating implications for CARICOM member states and all SIDS.

“Given current policies, global warming is still projected to surpass the 1.50C by 2030, and to reach 2.7°C within this century.”

The CCCCC said regarding adaptation and finance, it acknowledged that pledges to the financial mechanisms of the UNFCCC do not come close to the US$70 billion per annum needed now to build climate resilience in the region.

“Furthermore, the demand for climate financing is projected to quadruple by 2030 based on impacts associated with climate change and slow onset events. Still more concerning is the fact that the pledge for a US$100 billion floor by 2020 was not achieved at COP26, with developed countries indicating that they may not be able to meet this target, even with the most creative accounting matrix adopted, until 2023.”

The CCCCC said based on these indicators, the mitigation, adaptation and finance gaps are set to widen, unless immediate action is taken to scale and make climate finance more available to the most vulnerable.

It agreed with the notion that the Glasgow Climate Pact consolidates a new pre2030 climate agenda which has been described as a bridge to ambition.

“Thus, from a process standpoint, COP26 completed work around the Paris Rulebook, inclusive of transparency, common timeframes, while Article 6 maps out the framework for the operationalization of a carbon market. Taken together, these processes could yield results consistent with 1.5°C ambition but how much and how fast is not yet known.”

The CCCCC said it wanted to emphasize the urgent need for the region’s effective engagement in the programmes currently underway based on strong effective leadership, continued advocacy, greater partnership with the private sector and civil society, and other key stakeholders to define deliverables in line with regional interests and priorities.

“Even more critical will be support for regional efforts to advance climate action and bolster access to affordable finance,” the statement said with the CCCCC being encouraged to advance its strategic work plan moving forward and encouraged early engagement with policy makers, member states and the donor community to ensure its adequate resourcing.