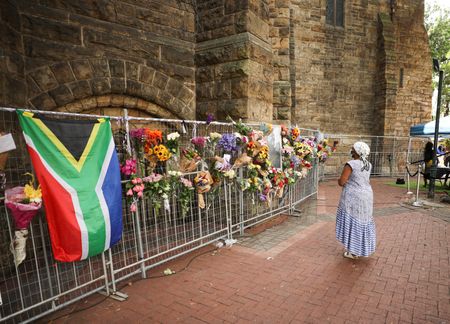 Tutu, a Nobel laureate who had preached against the tyranny of the white minority, was revered by Black and white South Africans alike as the nation’s moral conscience.

His passing prompted an outpouring of tributes https://www.reuters.com/world/africa/south-africas-archbishop-desmond-tutu-dies-aged-90-2021-12-26 worldwide, including from U.S. President Joe Biden and his predecessors Barack Obama and Jimmy Carter, Britain’s Queen Elizabeth, Pope Francis and the foundation of Nelson Mandela, South Africa’s first Black president and friend of Tutu.

“Fighting for freedom from the trenches of South Africa required a courage that cannot be described. Yet he stood resolute and fearless, leading demonstrations cloaked in his flowing clerical robe…,” said Mandela’s widow, Graca Machel.

The bells of St George’s Cathedral tolled for 10 minutes at noon local time on Monday, a homage set to be repeated every day until Friday. Tutu led numerous campaigns and marches against apartheid from St George’s steps.

The Archbishop of Cape Town, Thabo Makgoba, asked all who heard the bells “to pause their busy schedules for a moment in tribute” to Tutu.

Mourners laid flowers outside what is known as the “People’s Cathedral” and a powerful symbol of democracy. Black and white portraits of Tutu were attached to a fence and five condolence books were available for mourners who braved the wet weather.

“You fought the good fight, you inspired us to continue the fight for peace in the world,” read one message signed by Noel and Alfreda.

South African President Cyril Ramaphosa said in a national address late on Sunday that flags would be flown at half-mast nationwide and at South African diplomatic missions abroad until Tutu’s funeral, which is set for Saturday.

Ramaphosa and others called at the Tutu residence in Cape Town to offer their condolences to his widow Leah and other family members.

“His heart was big enough to hold the whole world in love,” Tutu’s daughter Mpho Tutu van Furth said of her father in an interview for the Trouw newspaper in the Netherlands, where she lives and works as an Anglican priest.

“He was in the company of the most powerful people on earth and he sat with the smallest, the weakest, the poorest and the neediest. He did it with the same love and laugh,” she said of Tutu, who was known for his infectious giggle.

Cape Town’s city hall and the Table Mountain which rises above the city will be illuminated every night this week in purple, the colour of Tutu’s clerical robes.

Tutu won the Nobel Peace Prize in 1984 in recognition of his non-violent opposition to white minority rule. A decade later, he witnessed the end of that regime and chaired a Truth and Reconciliation Commission to unearth the atrocities committed under it.

He later called the Black political elite to account with as much feistiness as he had the Afrikaners, but his enduring spirit of reconciliation always shone through and he never stopped fighting for a “Rainbow Nation”.

A memorial service is planned for Tutu in Pretoria, South Africa’s capital, on Wednesday. That same evening Cape Town will host a special tribute at its city hall attended by members of Tutu’s family, his foundation and various faiths and tribes.

On Friday Tutu will lie in state at St George’s ahead of Saturday’s funeral service, which will be led by Makgoba.

Tutu’s ashes will be interred in an ossuary behind the pulpit, in accordance with his wishes, the Dean of St George’s Cathedral, Michael Weeder, told a news conference alongside Makgoba on Monday.

Makgoba said a list of possible attendees ran to as many as 500 names, but added that COVID-19 regulations limiting funerals to a maximum of 100 people must be respected.

“Only a fraction of those who want to be there can be accommodated,” he said, urging others to pay their respects at services in churches and cathedrals around the country.