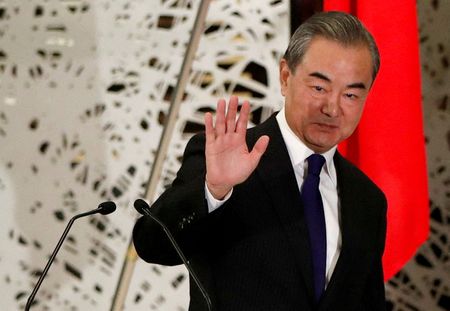 BEIJING/TAIPEI (Reuters) -Taiwan is a “wanderer” that will eventually come home and not a chess piece to be played with, the Chinese government’s top diplomat said on Monday, drawing a strong riposte from the island’s government.

China claims democratically governed Taiwan as its own territory and has in the past two years stepped up military and diplomatic pressure to assert its sovereignty claims, fuelling anger in Taipei and deep concern in Washington.

Speaking in Beijing, State Councillor and Foreign Minister Wang Yi said the cause of current tensions was the Taiwan government’s attempts to “rely on the United States for independence” and the United States and other countries trying to “use Taiwan to control China”.

“It is these perverse actions that have changed the status quo and undermined the peace in the Taiwan Strait, violating the consensus of the international community and the basic norms of international relations,” said Wang, a former head of China’s Taiwan Affairs Office.

To respond to this, China had taken “forceful countermeasures” to “shock the arrogance” of those who seek Taiwan’s formal independence, he said.

“Taiwan is a wanderer who will eventually come home, not a chess piece to be used by others. China must and will be reunified.”

Taiwan’s China-policymaking Mainland Affairs Council said in response that the island had never been a part of the People’s Republic of China.

“It is neither a wanderer nor a chess piece,” it said in a statement sent to Reuters.

“Only the 23 million people of Taiwan have the right to decide Taiwan’s future, and absolutely will not accept a path laid out by an autocratic political system.”

China has been particularly angered by support for Taiwan from the United States, the island’s most important international backer and arms supplier despite the absence of formal diplomatic ties.

Taiwan’s government has repeatedly denounced China’s pressure, saying that they will not give in to threats.

(Reporting by Beijing newsroom; Writing and additional by Ben Blanchard in Taipei; Editing by Robert Birsel and Hugh Lawson)