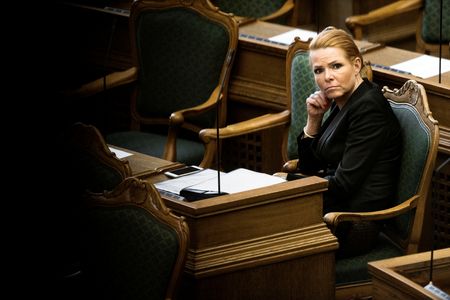 COPENHAGEN (Reuters) – Former immigration minister Inger Stojberg, a main architect behind some of Denmark’s tough immigration policies, was voted out of parliament on Tuesday by her fellow lawmakers following her conviction in a rare impeachment case earlier this month.

Stojberg was handed a 60-day prison sentence last week by an almost unanimous impeachment court for intentionally ordering the separation of under-age couples seeking asylum during her tenure as immigration minister in 2016.

“The conclusion in the case must be, that Mrs Inger Stojberg’s conviction at the impeachment court is incompatible with being a member of parliament,” Jeppe Bruus, a spokesman for the ruling Social Democratic party, told parliament.

Under Danish and human rights law, each refugee couple, either married or in a relationship, must be assessed on its own merits, implying that the minister’s order to separate all under-age couples was illegal. A total of 23 couples were separated.

The rules were changed to comply with law in the same year.

Ninety-eight lawmakers, including from the Liberal Party, her former party, on Tuesday voted in favour of ousting Stojberg from parliament, with 18 from immigration hard-liner Danish People’s Party and New Right voting against the motion.

Twentyfive out of 26 judges agreed to convict Stojberg in the impeachment court, only the sixth of its kind in the Nordic country in more than 170 years and the first since 1995.

After her incarceration, she is free to run in the next general election.

“Do not expect this to be the last your hear from me,” she said.